A former Soviet army tank officer convicted for his role in a 2009 attack on US and Afghan forces has been sentenced to life plus 30 years in prison.

Irek Hamidullin, 55, who was the first military prisoner from Afghanistan to be tried in a US federal court, was captured after the attack and held for five years at Bagram airbase, before being sent to the US.

During his address to the court, Hamidullin argued that he had the right to defend himself against “American aggressors” who had invaded Afghanistan.

“You accuse me of terrorism. That is a lie. I am doing what Jesus Christ told us to do,” said Hamidullin, who appeared pale and thin after being brought into court in a wheelchair.

Hamidullin is a veteran of the Soviet war in Afghanistan who stayed behind and joined the Haqqani Network, a Taliban-affiliated fighter group, US officials said.

He allegedly led three groups of fighters in a 2009 attack on an Afghan border police in Khost province. When US helicopters responded, the fighters tried to fire at them with anti-aircraft weapons which malfunctioned, prosecutors say. The coalition forces sustained no casualties.

Prosecutors had asked the judge to impose a life sentence on Hamidullin, citing the need to protect the public. Hamidullin’s attorney, Robert Wagner, had argued for a 30-year-term with supervised release.

Wagner noted that his client cooperated with investigators and argued that Hamidullin didn’t commit an act of “terrorism” but a “lawful act of war”.

His lawyers said on Thursday that they plan to appeal.

In August, a jury found Hamidullin guilty of all 15 counts of “terror-related” charges, including providing “material support to terrorism”, attempting to destroy US aircraft and conspiracy to use a weapon of mass destruction. 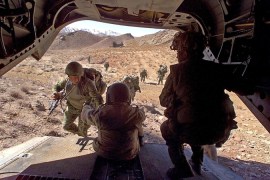 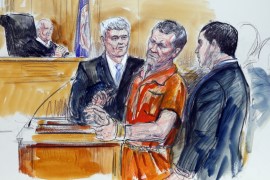 Irek Hamidullin, an ex-Soviet army officer, found guilty in US court of terrorism charges over attack in Afghanistan.