Amid a wave of violence over the past two months, Israel has built more than a dozen new checkpoints in East Jerusalem, adding to the 96 Israeli-controlled permanent checkpoints throughout the West Bank. Although Israel says the new checkpoints are temporary, Palestinians have had to adjust to the extra searches, further delaying their trips to school, work and even to hospital.

After school finishes for the day, the East Jerusalem checkpoints sometimes become flashpoints for clashes between Palestinian youths and Israeli forces. Al Jazeera spoke to residents about how the checkpoints are affecting their lives.

As you can see here today, if someone wants to run an errand that should take 10 minutes, it could turn into an hour, and the reason for that is the existence of the checkpoints.

Every day we have difficult times. Today, just an hour ago, a student was arrested at his school. Every day, the Israeli police search the children.

A number of the younger children don’t go to school any more because they are scared of the police, the military, and the checkpoints.

All of this has created a state of depression for us.

There is no need for this checkpoint. It’s been here for nearly two months with the claim that it serves security, but this is not what brings security to Israel.

What would [bring security] is for the Israelis to be just with us, and let us live. They should stay away from our villages and we will live peacefully.

It was a month ago that they put up the checkpoints. We are always late for school and there is always traffic.

Sometimes there are inspections and other times the Israeli forces attack us. Yesterday, the soldiers fired towards the Red Crescent hospital while we were here.

They even detain us on the way to school sometimes.

The worst thing is getting searched, but also when the Israelis shoot tear gas at us on the way to school – and it [tear gas] even goes into the hospital.

Before the checkpoints there were problems, but less than today. Sometimes they stop me and search me here. They make me take out all my stuff from my backpack when they search me.

In the future, I would like them to take this checkpoint away – that’s it. Let us go to school on time. Sometimes the school calls my father when I am late, because there is a lot of traffic.

When I came to the Suwwana checkpoint, when I got there – even though I was standing and in pain – I still had to show them my ID card.

We live under colonisation; of course we accept that this is the situation.

I’ve had many appointments at this hospital and I was scared to attend them. The wait could be from five minutes to half an hour.

Here in this neighbourhood, there are clashes, there is stone-throwing, and the Israeli forces shoot tear gas. I’ve suffocated many times, especially lately. There has been a lot of tear gas. God willing, I was OK. This is the situation…

I’m afraid of going and coming and the smell of tear gas. Especially while I was pregnant, the gas caused me problems breathing. In my lifetime, this has been the most difficult time period.

The checkpoints have made so many problems and delays. I am late to my work, my business. It’s a pain.

First I cross Qalandia, then the one through Wadi Joz, and now this checkpoint [in Suwwana], so that’s three I cross.

Today, Qalandia checkpoint alone was an hour. Wadi Joz was a quarter of an hour to 20 minutes; this one was the same. I need about two hours to get to work just because of the checkpoints.

I left at 6am. Other workers leave around 4am to get here. We arrive at work around 9am.

At the checkpoints, the soldiers searched my car … I showed them my ID. I can be stopped maybe half an hour, maybe an hour; the soldier could simply say: “Go back.”

He could simply say: “I don’t like your ID, go back.” You could be going to work and it’s extremely normal for the soldier to tell you to go home, and then what? You don’t go to work that day.

The Israelis have divided Jerusalem. We cannot conduct ourselves normally, because the soldiers are behaving like tough guys. 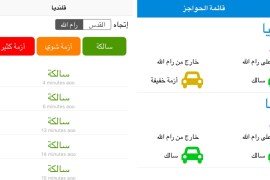 Azmeh and Qalandiya are free apps designed to inform motorists of traffic conditions when movement is restricted.