Two Palestinians were shot dead by Israeli forces in the flashpoint West Bank city of Hebron after allegedly stabbing and lightly wounding an Israeli soldier, the Israeli army has said.

“Two assailants stabbed a soldier in Hebron,” a military statement said on Friday. “In response to the threat, forces fired at the attackers, resulting in their deaths.”

In another incident north of Ramallah, a young Palestinian was killed after allegedly stabbing an Israeli soldier during a security check near the village of Abboud.

Also on Friday, a Palestinian man was shot dead near the illegal settlement of Ofra in the occupied West Bank after allegedly ramming his vehicle into Israeli soldiers, the army said.

Read more: ‘We live under colonisation’

The incidents come after a recent spate of violence in Israel and the occupied Palestinian territories following Israeli incursions into the al-Aqsa Mosque compound.

“A very difficult situation that continues here, one-on-one violence – we have people killed every day,” she said.

“The Israeli security forces will tell you that it’s extremely difficult to prevent, but when you speak to Palestinians they will tell you that this is the by-product, the result, of decades of occupation; that the youth are frustrated, that they don’t see a way out – certainly politically, any end to this on the table.”

Since October 1, a total of 112 Palestinians have been killed along with 21 Israelis, an American, and an Eritrean. 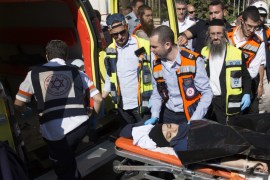