The British parliament has begun to debate a motion authorising the use of military force against the Islamic State of Iraq and the Levant (ISIL) group in Syria.

The discussion comes amid divisions over the planned intervention within Prime Minister David Cameron’s own Conservative Party and the opposition Labour Party.

Several Conservative MPs are expected to vote later on Wednesday against the proposal and the government will probably rely on Labour MPs breaking ranks with their leader Jeremy Corbyn to approve the move.

The government in its motion says the legal basis for the proposed intervention is in line with UN Resolution 2249, which calls on member states to “eradicate” ISIL’s safe havens in Iraq and Syria.

“[The government] acknowledges the importance of seeking to avoid civilian casualties, using the UK’s particular capabilities; notes the government will not deploy UK troops in ground combat operations,” the motion reads.

When asked by an MP about the potential increase in civilian casualties as a result of air strikes, Cameron said British involvement would help protect people from ISIL.

“What we’re doing is … preventing this death cult from carrying out the ghastly acts that it does on a daily basis.”

The plan to strike ISIL in Syria is backed by a majority of the British people, according to two recent polls, but has prompted anti-war demonstrations.

Thousands turned out on to the streets of London and other cities across the UK on Saturday to voice their opposition to the air strikes and hundreds protested outside parliament on Tuesday, the day Cameron announced the debate.

ANALYSIS: What the British military really contributes in Syria

Critics argue that striking Syria now will put civilian lives at risk and further complicate the Syrian war, which has already killed hundreds of thousands of people.

Cameron drew up plans to hit ISIL in Syria after the November 13 attacks in Paris, which left 130 people dead.

British forces are already targeting ISIL in Iraq and have previously targeted British ISIL members with drone strikes in Syria. 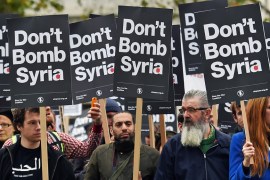 What the British military really contributes in Syria

British Parliament will vote on Wednesday on whether it should extend RAF strikes in Iraq and Syria. 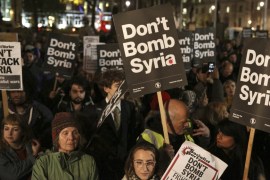