Parts of Europe have been hit by strong wind and heavy rain.

Flights were diverted and traffic ground to a halt as the storm blasted through the north of the continent.

The storm blew in from the Atlantic on Sunday, bringing heavy rain and snow, together with strong winds to Ireland, Scotland and northern England.

Thousands of people in Ireland were left without electricity as winds gusted over 110km per hour, and in northern England the roof of a parade of shops was blown onto cars parked below.

The storm then intensified as it moved towards Scandinavia.

Buildings were damaged, trees were toppled and trains were cancelled as the winds gusted up to 165km/h.

The Oresund bridge, which connects southern Sweden and Denmark, was closed as the storm raged and 75,000 customers in Sweden lost power.

In the German city of Hamburg, the storm also brought flooding. The fish market was submerged under 2.8 metres of water.

The storm then continued east, slamming into Finland and the Baltic states. The winds forced the cancellation of ferries in the Baltic Sea, and roofs were ripped off homes in Latvia.

The storm is now clearing away from Europe, but more rain is expected in the northwest over the next few days.

Flood warnings are already in force in parts of the British Isles, and North Wales is bracing itself for another 60mm of rain. 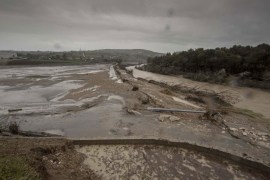 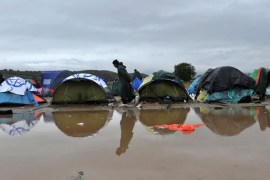 Stormy weather adds to the misery of the refugees trapped around the Greek border with Macedonia. 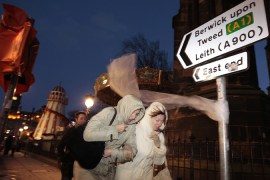 Schools and transport services are shut as Scotland has its worst storm in 10 years.