The leader of Nepal’s ethnic Madhesi community, which is waging mass protests against the country’s new constitution, has accused mainstream political parties of racism.

“The mainstream Nepali parties don’t consider Tarai people as their own,” said Upendra Yadav, the leader of the Sanghiya Samjawadi Forum, referring to those living in the southern plains bordering India.

“The Nepali ruling class discriminates against Madhesi people, who comprise [nearly] half the population. But according to the new constitution, our representation won’t even cross 25 percent in parliament,” he said in an interview with Al Jazeera.

He said that the government is ready for constitutional amendments through political consensus – an onerous task in divided Nepali politics.

The current constitution was passed five years late, with political bickering and the personal ambitions of politicians slowing the process after a second constituent assembly was elected in late 2013.

On September 20, when Nepal finally adopted its new charter replacing the 2007 interim constitution, it was met with cheers.

But not everyone was happy, saying that some of the progressive elements of the interim charter were diluted.

The new charter defines Nepal as a secular republic divided into seven federal states, and has provision for proportional representation for historically marginalised groups such as Dalits, Madhesis and other minorities.

People in the southern Tarai plains, who share close cultural ties with India, want the boundaries of the new provinces redrawn. They are seeking measures to address underrepresentation in parliament, as well as in government jobs.

Since the new charter was passed, they have staged mass protests calling for amendments to accommodate their demands.

“All social groups should get equal rights and opportunity, those who are denied will demand their rights,” said the Sanghiya Samjawadi Forum’s Yadav, who has been at the forefront of the agitation.

Leaders from the hilly region have traditionally dominated the tiny Himalayan nation’s political and economic life.

But historically marginalised groups have become vocal after the monarchy, which was over two-centuries old, was abolished in 2008 as a democratic process was put in motion.

The Maoists who fought government forces from 1996 until 2006 were instrumental in the monarchy’s ouster.

With the Nepali leadership paying little heed to their demands, protesters have imposed a near complete blockade of the border posts with India leading to severe shortage of fuels, raw materials and other essential items in the landlocked nation of 29 million people.

The ruling coalition led by hardline Prime Minister Khadag Prasad Oli has, some said, been slow to react to the blockade, exacerbating hardship.

Thomas Bell, author of the book Kathmandu, said: “There’s been little serious attempt at negotiation, either before or after the constitution was passed. The Madhesi parties distrust the government and they are also constrained by the strong feelings of their supporters.

“The national parties seem unwilling to accommodate Madhesi demands, even though some of these are only things that have been conceded in past agreements. Talks have been repeatedly undermined by hardline actions and rhetoric.”

Sanghiya Samjawadi Forum’s Yadav agreed that his demands are not new.

“We are saying to put into effect the eight-point agreement of 2008, which was partially implemented,” he said.

As protests rage, millions of students have been forced out of schools, hospitals are running low on essential medicine, transportation has taken a hard hit and industries have shuttered.

More than 50 people, mostly Madhesis, have been killed in the violence.

Kathmandu, which imports almost its entire petroleum needs from India, has been forced to ration fuel. It has accused India of tacitly backing the blockade – a charge India vehemently denies.

India-Nepal ties are at their lowest in decades, with many saying the proverbial umbilical cord connecting the two neighbours is at breaking point.

Two-thirds of Nepal’s foreign trade is with its giant southern neighbour, while nearly six million Nepalis work in India. Indian firms are the largest investors in the Himalayan nation.

India’s demand for constitutional amendments in support of the Madhesi people has not gone down well with Nepali leadership, which has at times allowed anti-India sentiments to grow.

TV cable operators, for instance, have cut off Indian news channels for airing what they call Indian propaganda.

In a rare move, on Sunday, 13 Indian soldiers were briefly detained in bordering Jhapa district.

In recent days, civil society groups, particularly in Kathmandu, have spoken out and used hashtags such as #KTMwithMadhes and #AddressMadhes on social media to pressure the government to resolve the issue through dialogue.

“The national establishment seems highly resistant to providing genuine inclusion for Madhesis. This reflects traditional prejudices, and the sense that Madhesis are not loyal Nepalis but a kind of Indian fifth column,” Bell said.

“However, the Madhesis are demanding inclusion within the Nepali state, not separatism.”

More than 100 days have passed since the protests began.

“The blockade has led to a rise in nationalism in Kathmandu, and elsewhere in the hills. Although the blockade is caused by Madhesi protests, it is also clear that since mid-September they have been backed by India. This plays into conventional anti-Indian sentiments and has partly obscured the fact that this is, at root, a domestic crisis,” Bell said.

Reports of sporadic fighting have emerged as exasperated Madhesis resorted to violence in recent weeks.

Chandra Kishore Jha, a journalist based in the Tarai region, told Al Jazeera that people are getting restless, and peaceful protests might soon explode if their demands are not addressed.

“For Nepal, it is the last opportunity for national integration. If this is missed then separatists can get a boost,” the reporter said.

But Yadav, the Madhesi leader, promised any agitation will remain peaceful as he denied any backing from India.

“We are fighting for our own rights, we are not fighting for India,” he said. “Don’t bring India in this, our movement has nothing to do with India.” 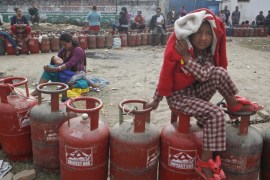 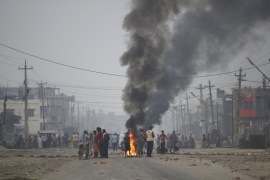 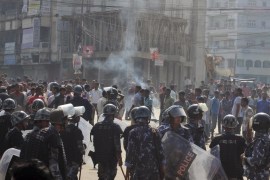