“It’s the worst feeling ever,” she told Al Jazeera, noting a sleepless night before the hearing is usually followed by an intense headache and sickness afterwards. “I can’t actually describe it. It’s not easy for any of us.”

On Monday, she nearly lost her voice too. Along with dozens of family members, friends and supporters, Ansam protested for hours outside the Jerusalem District Court, calling for justice for her murdered cousin Mohammed Abu Khdeir. The 16-year-old was kidnapped, beaten and driven to a Jerusalem forest, where he was burned to death by Jewish Israeli settlers on July 2, 2014.

Ansam, who has attended almost every court session since the trial began, said she did not expect the family to receive justice.

“When there is racism, there is no justice,” she said. “If it was a Palestinian who did this to an Israeli child, they would kill him before even arresting him. Then they would demolish his house and arrest his family. What did they do for Ben-David? Did they demolish his house? They are trying to prove that he’s crazy, that’s it.”

court. It is not going to grant Palestinians a fair outcome.”]

Inside the Jerusalem courtroom, two Israeli minors were convicted of murdering Mohammed. But the accused ringleader, Yosef Haim Ben-David, 31, was not convicted due to questions over his mental state.

While a panel of judges stated that Ben-David had committed the murder, the court accepted a petition to consider a claim of insanity, and a new hearing was scheduled for December 20.

“I don’t think we will ever get justice from this court for the killing of Mohammed,” he said. “They are going to let them go free. I have no faith in the [Israeli] court. It is not going to grant Palestinians a fair outcome. But I’m not going to stop. We will take it to a higher court.”

Aisha Abu Khdeir, the victim’s aunt, added: “Every time we have a hearing, it is like Mohammed is being burned again and again.

“It’s been one year and four months already, and it’s going to last until January at least and after that, God knows when it will end. It could take years.”

Meanwhile, in the Palestinian village of Duma, where a brutal arson attack allegedly carried out by Israeli settlers this summer killed three Palestinians, the verdict was also received with grim dismay.

“What happened with the Abu Khdeir verdict is a total injustice. It is beyond words,” said Nasser Dawabsheh, 42.

Three members of the Dawabsheh family were burned to death by suspected Jewish Israeli settlers in July as they slept in their home.

Saad and Reham Dawabsheh were killed, along with their 18-month-old son, Ali. Four-year-old Ahmed Dawabsheh survived the attack but was badly burned.

Ahmed’s uncle, Nasser, who has fought for months to bring his family’s killers to justice, told Al Jazeera that he had not given up hope in the case, despite the fact that no suspects have been charged. The family’s most recent update on proceedings came a month ago, he said.

“I hope we will get justice. I hope one day I will see the murderers and people who encouraged them to kill Ali and his family, brought before a court in front of a judge,” he said, but added that he believes the Israeli system is discriminatory. “The whole system is corrupted and is working together against Palestinians, especially when an Israeli commits a crime against a Palestinian.”

The case took an extraordinary turn in September, when Moshe Yaalon, the Israeli defence minister, said that the Israeli establishment believed it knew who carried out the deadly arson attack, but that there was “difficulty putting them on trial”.

As of Tuesday, no charges had been brought against any suspects in the Dawabsheh killings.

“We don’t understand how the Israeli government knows who the killers are but is not doing anything to punish them and bring them to court,” Nasser said.

A widespread perception of discrimination in the Israeli legal system, however, has not stopped other families of Palestinians killed by Israelis from filing legal cases.

In Jerusalem, the family of Fadi Alloun launched court proceedings over the killing of the 19-year-old, who was shot dead on October 4.

The case targets three members of the Israeli police forces, according to Fadi’s father, Samir Alloun, who is also aiming to bring the case before the International Criminal Court.

In a video of the teenager’s death, Alloun seems to be trying to evade a group of Jewish Israelis and appears not to pose an imminent threat as he is shot seven times by at least one police officer.

He had allegedly stabbed a 15-year-old boy in the moments before the video was taken.

“They killed him for no reason, just because he is an Arab,” Samir told Al Jazeera. “We have a lawyer. We have been to the court in Jerusalem and we have proposed the case.

“We haven’t heard anything back yet,” he added. “This case will take a long time.” 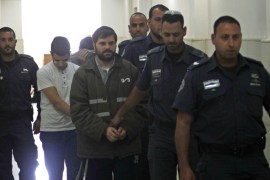 As Mohammed Abu Khdeir’s family marks a year since his death, they fear that justice will not be served. 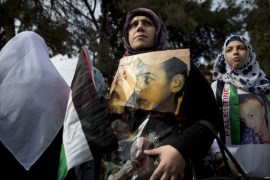 Court to consider insanity plea for third suspect on trial for burning death of 16-year-old Abu Khdeir in 2014.