The rescue operation of a factory collapse in Pakistan is too slow and ineffective, family members and colleagues of those crushed under the building have said.

Speaking to Al Jazeera on Saturday, several relatives said their hope was fading as the search entered the fourth day, and they were becoming increasingly impatient.

As crew members carefully cut through the unstable piles of rubble and steel, Mohammed Saleem said he has been waiting on the site since the collapse, hoping to find his 18-year-old nephew.

“It’s been four days, what are these rescue workers doing? They are so slow and not prepared to handle this accident. I don’t know if my nephew is alive any more,” he said.

“I’m getting impatient and worried about him. What is taking them so long? I can only hope that my nephew is alive.”

Many relatives rushed to the scene on Wednesday. At least 45 were killed and dozens more are still under the rubble of the Rajput Polyester Factory in the eastern city of Lahore.

Karim Manaka, whose son is still trapped, said it would be a miracle if anyone comes out alive.

“The rescue operation is too slow,” he said. “We are entering the fourth day of this operation but not even 20 percent of work has been done.

“If the rescue workers were fully equipped they would have saved many people. Why are the authorities not keeping a check and balance on the quality of the material used for construction? Such incidents have happened in the past as well.”

However, there is a glint of optimism after a teenager was rescued alive on Friday.

Mohammed Shahid, 19, was recovered having spent 50 hours under the debris.

“Shahid was recovered and only his foot was injured. His family is celebrating,” said Mohammed Usman, a local administrator. “He is now at hospital recovering.”

Hamza Ameer, the CEO of the online news agency Asia Despatch, was at the site when the building collapsed.

He told Al Jazeera that rescue workers were too slow to arrive.

“If the rescue operation had started immediately after the building collapsed, they would have saved a lot of lives,” said Amir.

“The rescue crew is trying their best now, but it seems like the death toll is going to rise as it is very rare for someone to survive under the rubble for more than four days.”

“This is not an easy operation. We have to make sure we conduct this operation cautiously as there are dozens of people trapped. It is easy to remove all the debris in a few hours’ time, but the challenge is to rescue people waiting for help,” said Zia.

“We have about 400 to 500 rescue workers on site working day and night. We’ve rescued 103 people and hoping for more, but the chance [of more survivors] is less.”

Pakistan has a poor safety record in the construction and maintenance of buildings.

Last year, a mosque collapsed in the same city, killing at least 24 people.

In 2014, more than 200 people lost their lives to collapsed roofs following torrential rainfall and flooding.

In 2012, more than 255 workers were killed when a fire tore through a clothing factory in Karachi in one of the deadliest industrial accidents in Pakistan’s history.

Back in Lahore, Sakina Bibi sits alone at the site watching the rescue workers pick through the debris. She looks closely at each body pulled out of the rubble.

“One moment I am hoping that my son will be pulled out alive, but the other moment I lose my hope. It’s such a huge building over him. He can’t be alive,” she said.

“I am a mother, what should I do? People are asking me go home. How can I stay home while a piece of my heart is under the rubble? I can’t sleep, I can’t eat and drink. I am just praying.” 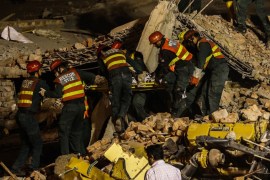 At least 45 people killed and more than 100 others injured after factory collapses in industrial area of city. 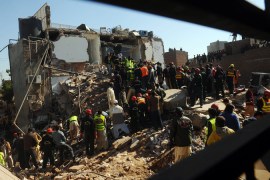