Leaders of political rivals Taiwan and China have met for the first time in more than 60 years for talks that come amid rising anti-Beijing sentiment on the self-ruled island and just weeks ahead of elections.

China’s President Xi Jinping and his Taiwanese counterpart, Ma Ying-jeou, shook hands at the start of the summit in Singapore on Saturday.

Before the leaders entered a closed meeting, Xi said the two sides are “one family” and cannot be pulled apart.

Ma responded by telling Xi the two sides should observe mutual respect after decades of hostility and rivalry and “respect each other’s values and way of life”.

“Even though this is the first meeting, we feel like old friends. Behind us is history stretching for 60 years,” he said.

“Now, before our eyes, there are fruits of conciliation instead of confrontation.”

It was the first such summit since China’s civil war ended in 1949.

The talks come ahead of presidential and parliamentary elections in Taiwan, in which the independence-leaning Democratic Progressive Party (DPP) is favoured to win, something Beijing wants to avoid.

The ruling Nationalists, also known as the Kuomintang (KMT), retreated to Taiwan after losing the civil war to the communists, who are still in charge in Beijing.

China has never renounced the use of force to bring what it considers a breakaway province under its control.

But while bilateral trade, investment and tourism have blossomed – particularly since Ma and his KMT took power in 2008 – there is deep suspicion on both sides, and no progress has been made on any sort of political settlement.

No agreements were expected in what was seen as a highly symbolic get-together at a luxury hotel in Singapore, a largely ethnic Chinese city-state that has maintained good ties with both sides for decades.

Neither of the leaders was expected to address each other as “president”, instead using “mister”.

RELATED: Why China’s Xi Jinping agreed to meet with Taiwan

Al Jazeera’s Rob McBride, reporting from Beijing, said that China’s state media has been largely positive in the lead-up to the landmark meeting.

However, McBride said that Beijing was being careful not to make the summit appear as a meeting of equals.

“At this historic juncture of a meeting between leaders from both sides of Taiwan Strait, we genuinely hope that both sides can show sincerity, demonstrate goodwill, meet each other half way and confront their difficulties,” China’s official People’s Daily wrote on Saturday.

In the heart of the Taiwanese capital, Taipei, about 1,000 protesters marched on Saturday to denounce the meeting.

But their anger was not necessarily representative of the public view of the summit.

“It’s a good idea, and it’s well timed,” one woman told Al Jazeera. “I have faith in the president. I believe this could open a new chapter for Taiwan.”

Taiwan lost its UN seat to China in 1971, and only 22 states formally recognise the island. 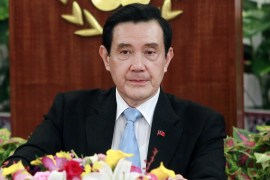 Ma Ying-jeou says his upcoming meeting with Chinese president had nothing to do with Taiwan’s upcoming elections. 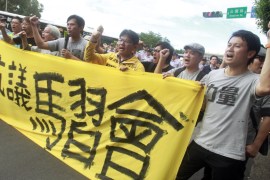 A new era in Taiwan-China relations?

China and Taiwanese leaders will meet for the first time since their countries split in 1949. 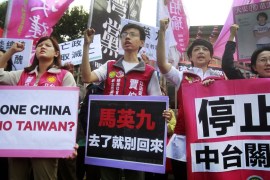