Gaza – TEDx finally arrived in the besieged Gaza Strip, and the Palestinians there had some incredible insights.

For several years, Palestinians in Gaza dreamed of hosting their first TEDx event, and on October 29 they were finally able to do it.

The event was called TEDxShujayea, named after the neighbourhood which bore the brunt of Israel’s deadliest attacks on the Gaza Strip last year.

Shujayea was effectively levelled to the ground in what rights groups have documented as one of the worst human rights violations during the 51-day war.

Speakers ranged from university professors to university students, young self-employed individuals and freelancers, as well as artists and engineers.

TED rules dictated that the audience for the first event should not exceed 100 people.

Al Jazeera was able to gain access to the exclusive event, and has gathered the seven main themes TEDxShujayea brought to light:

1- Shujayea has become an icon.

An icon of resistance, of resilience, of hope, and of life.

Israel’s attempts to eradicate this neighbourhood and kill its spirit have failed.

“Shujayea refuses to be defeated. Shujayea is now the epitome of resurrection that refuses to kneel to Israel’s barbarity,” said Refaat Alareer, one of the key speakers, and a resident of Shujayea.

Refaat’s brother was killed and his family house was destroyed in the summer attacks of 2014.

“I am participating to give voice to my birthplace and the fallen ones of Shujayea whose love of Palestine we must promote,” he added.

2- Palestinian youth are taking the lead.

The TEDxShujayea event was put together by two dozen organisers and volunteers: The oldest being 25 years old, and the youngest only 12.

They come from different backgrounds, but their diversity became an asset rather than a liability.

Two things to take note: The youth expressed their frustration with the business-as-usual workings of Palestinian politics, and are now taking matters into their own hands, starting with leading the conversation.

For a long time, those young people were restrained by political divisions, but they are now breaking away from that.

“To bring about change, we need to influence the masses. We want to be the change we want to see in Palestine,” Asem Alnabeh, an event organiser, said.

Hashim Ghazal, who is deaf, used a sign-language interpreter to talk about how leading a successful life, defying stereotypes, and overcoming disability is a metaphor for Gaza.

Despite the siege, aggression, internal division, and the many hardships, Gaza shows that hope can indeed be found in the darkest places.

4- Finding hope in the tiniest of cracks.

Ahmed Alfaleet, a freed Palestinian prisoner who spent 19 years in Israel’s jails, pointed out the little regard people have for things that are taken for granted; how seemingly trivial objects are not so trivial when they are no longer in reach.

Alfaleet talked about how Palestinians in Israeli prisons are deprived of basic rights, from merely having the ability to look at the moon to eating regular food or communicating with their families.

To fight Israel’s suffocating measures, the prisoners, Alfaleet emphasised, found hope in the tiniest of cracks.

5- Palestinians in Gaza have plenty of stories worth telling.

Whether told in the form of an article, a video, or even at an event like TEDx, a story untold is a dead story. Stories give power to the people.

Refaat Alareer’s speech, Tell me a Story, highlighted this point: Palestinians must not let the stories of their parents and grandparents die out. That will allow the narrative of the other to take control.

With examples from Africa and Canada, Alareer explained the necessity of owning our narrative. The people’s narrative does not need to be marginalised by internal Palestinian politics nor should it be determined by the elite.

6- Palestinian youth have become successful at addressing the world directly.

In recent years, people have started hearing from Palestinians rather than about Palestinians. TEDxShujayea has shown that they are also very much interested in life in Palestine beyond the fire and the smoke.

The way people from around the world interacted with the event was, simply put, amazing. Many sent messages of support and solidarity. On Twitter, there were 3,000 tweets with a reach and impressions of nearly 14 million.

Having said that, however:

7- It’s time Palestinians spoke to themselves, too.

“We wanted to show a different picture of Gaza, not only to the outside world, but to Gaza [Palestinians] themselves, too,” Roba Abumarzouk, a TEDx organiser, wrote on her Facebook account.

Palestinians need a restored faith in their capabilities, strengths and ingenuity. TEDxShujayea was a step in that direction, a successful one to be sure, but it needs to be seen in the context of intra-Palestinian communication. Palestinians, more than anything else, need to talk to Palestinians. 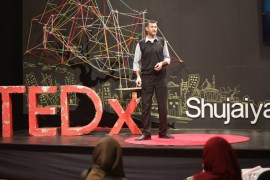