Romanian Prime Minister Victor Ponta has announced his resignation after mass protests in the wake of a nightclub fire that killed more than 30 people last week.

“I’m handing in my mandate, I’m resigning, and implicitly my government too,” Ponta said in a statement on Wednesday. “I hope the government’s resignation will satisfy the people who came out in the streets.”

Ponta said he would stay on until a new government is in place.

President Klaus Iohannis will name a prime minister to form a new government, which needs to be approved by parliament.

If this fails twice, early elections will be called. Romania is scheduled to hold parliamentary elections in December 2016.

Deputy leader of the opposition Liberal Party, Catalin Predoiu, hailed the resignations. “This is a victory of the street. It is a lesson for all politicians,” he said.

Cries of “shame on you” and “assassins” filled the streets of Bucharest as thousands of people rallied on Tuesday demanding cabinet resignations as the death toll from the fire at the Colectiv nightclub rose to 32.

Anger has been brewing for some time in Romania against the government, which many perceive as being corrupt, and Friday’s fire has added to the discontent.

“It is the outcry of a generation,” local journalist Sanda Nicola told Al Jazeera.

“The young professionals of this country cannot bear their irresponsible political rulers anymore, they want a profound shift within their society.

“At least three million Romanian people were forced to emigrante in recent years in order to make a proper living for their families. The people protesting these days in Bucharest and in other major cities of the country are those who don’t want to leave the country. They feel you can make it at home if the corrupted state is shaken.” 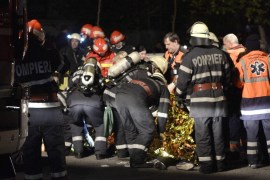 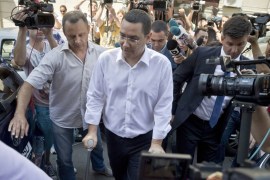 Romania’s PM has been named as a defendant in a five-week long criminal investigation of several corruption charges.