Tunis, Tunisia – Centre-rightists in the European Parliament have launched Conservatives and Reformists Initiative (CRI), a programme aimed at deepening engagement between centre-right parties around the world.

The CRI initiative was announced in Tunis on Saturday at the end of the two-day summit that mainly focused on advancing the values and capacities of centre-right political parties in the Muslim world.

Syed Kamall, European Conservatives and Reformists chairman, stressed the importance of the initiative in promoting free market in emerging democracies in North Africa and the Middle East.

He urged the centre-right parties worldwide to strengthen their peers in Arab countries, which had been victims of authoritarians “who want to impose religion by force, and others who want to impose socialism by force”.

“But conservatives shouldn’t want to impose anything,” Kamall added.

“We should trust the sound judgment of the people. We understand that the rational pursuit of self-interest under the law will, other things being equal, create a free and prosperous society.

“Our task, as legislators, is to ensure that there is a space for this process to unfold.”

The initiative launched seeks to find solutions to global security threats, as well as growth and economic prosperity. It also encourages a free market, arguing that without inclusive growth, it is difficult to maintain rule of law.

Kamall pointed out that part of Tunisia’s success came from its feat that was reconciling its religious identity with its commitment to an open and pluralist society.

“You can find examples of success and failure in all religions. But the question has a particular sharpness, it seems to me, in North Africa where several countries’ authoritarian regimes were in the habit of justifying their dictatorship by presenting themselves as the sole alternatives to religious fundamentalism.”

Meanwhile, the organisers said that their choice of Tunisia was to show support for the fight against “terrorism” and to applaud its revolution model.

The security situation, however, remains fragile with several incidents of violence that have also reflected badly on the country’s economy, which relies mainly on tourism.

A gun attack at a tourist hotel in a Sousse resort this June left 37 people dead and hit the economy hard.

Two months prior to that, attackers hit the Bardo museum in Tunis, killing a group of foreign tourists.

Kamall pointed out that a secular dictatorship should not be replaced by a a religious dictatorship.

“Freedom of worship – or freedom not to worship – should be accepted along with freedom of speech, assembly and contract,” he said.

“Tunisia, as I say, seems to me a success story in a region that needs success stories. Here, political parties treat their opponents as fellow citizens – and not enemies – with whom they disagree.” 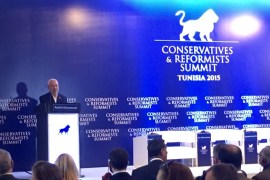 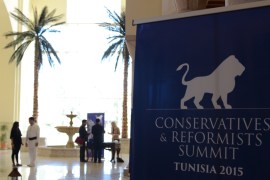 Al Jazeera talks to head of a European right-wing parliamentary group as it launches a summit with Islamists in Tunisia. 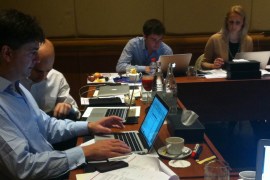