A team of scientists in Japan have found that humans empathise with humanoid robots in a similar fashion as with other humans.

They monitored the brain activity of 15 adults while they were shown a series of images, either a human or robotic hand in painful or non-painful situations, such as having a finger cut by a knife.

The researchers at Toyohashi University of Technology and Kyoto University discovered that humans showed empathy towards the robots in perceived pain in a similar way, though slightly weaker, than the empathy they felt towards humans in pain.

The scientists put this difference down to humans’ inability or delay in taking a robot’s perspective.

“This could mean that we only show empathy towards a robot once we classify it as something similar to an animate creature,” said Noel Sharkey, emeritus professor of artificial intelligence and robotics at University of Sheffield.

“This is a very important start to our understanding of empathy towards inanimate objects.”

The Japanese study, which supports the findings of previous research, but used electroencephalography (EEG) instead of other techniques to monitor brain activity, is aimed at helping those developing robots to better understand how humans perceive and respond to them.

“One of the big justifications for making robots human-like is that people will better relate to them,” Dr Matthew Howard, a lecturer in robotics at Kings College London, said.

“If humans find robot behaviour ‘natural’ they are better able to predict it, and therefore be safe around it.”

The study only showed test subjects static images, an aspect of the research Howard said could be developed in the future.

“It would be interesting to see how subjects react to movements,” he said, adding: “This would be more directly relevant to the safety issue and I would expect stronger responses from participants for moving images.”

Other robotics researchers see the findings as important but limited, with much more work needing to be done to understand how humans feel about robots.

“As we look at robots in the home we want people to be comfortable with them,” said Richard Walker from UK-based robotics company Shadow Robotics, who is currently working on a project which aims to develop robots to help the elderly and those with dementia.

“This is particularly challenging for people with cognitive impairment,” he said. “I look forward to seeing how this work can help us design more ‘social’ robots”.

Other research has demonstrated that humans feel greater empathy for robots when they appear and behave in a realistic way, especially when the robot is seen to be responding to a force that would cause pain in a human.

“It would be interesting to programme the robot to have different responses to painful stimuli, and see how this affects the results,” Howard said.

The Japanese study also only looked at the difference between human responses to perceived human and robot pain, and not those towards other inanimate creatures.

“This is important to determine if the reaction is specific to robots,” Sharkey said.

“For example what kind of reaction would people have to seeing the beheading of a Teddy Bear?” 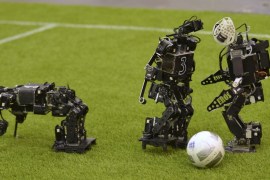 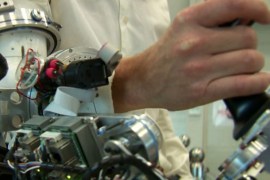 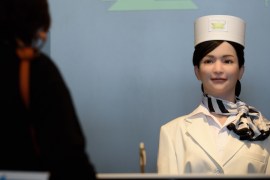 Businessman insists hotel, with no human workers, is not a gimmick and will cut operating costs.