Chong Kneas, Cambodia – No celebrations took place this year. For the fourth time since 2010, the Cambodian government cancelled this November’s water festival – a hallowed three-day event marking the change in direction of the river feeding Southeast Asia’s largest lake, the Tonle Sap.

Low water levels and persistent drought, officials claimed, ruled out squandering scant resources on carnivals. While many in Phnom Penh cried politics, for the 1.5 million Cambodians whose livelihoods depend on Tonle Sap, festivities in the capital feature little among their concerns at the impacts of a changing environment.

“We used to catch 10 times as much,” says Ma Chun, a 53-year-old fisherman who has been living in the northern floating village of Chong Kneas for almost four decades. “Before we would bring in 50 or even 60 kilogrammes every day. Now we only get around five.”

A few creaking timber houses downstream, father of three Hon Heng says the water, like his income, is at an all-time low. “Competition for fish has increased a lot and now people just have to look out for themselves,” he explains.

“I don’t know what we’ll do if there’s no change. There is nowhere else we can go.”

With his own waterborne home inching steadily lower, Chun has taken to selling miscellaneous groceries and tackle to supplement his income, unhopeful of any imminent improvements.

“The drought is because of climate change,” he says. “I don’t know much about the matter, but I can see that it hasn’t been raining and now when it should be cold, it is very hot.”

Science supports Chun’s claims. International researchers of the Tonle Sap, whose vital ebb and flow have earned it the moniker “Cambodia’s beating heart,” have over a decade been documenting the effects of a shifting climate on its most numerous inhabitants.

“We are seeing the change not only in the size of the catch, but also the size of the fish,” says Sovan Lek, a professor at the University of Toulouse and Cambodian native.

Lek is leading a team investigating the social and ecological implications of climate change for freshwater fisheries through a study of the world’s most abundant, the Tonle Sap.

Typically yielding about 300,000 tonnes of fish each year, the lake is the source of 70 percent of Cambodia’s protein and the surrounding floodplains and forests crucial to its agriculture and ecosystems.

As Lek explains, some of the water system’s biggest players are vanishing, including the staple quarter-tonne giant catfish. “Adaptation to change is more difficult for these species,” he told Al Jazeera, “so the real danger is extinction.”

The weak adaptive capacities of Cambodia’s fisheries are mirrored by that of its infrastructure as a developing, post-civil war and agrarian society. Combined with the reliance of some 80 percent of its population on subsistence farming, these factors have propelled the country to the top of climate vulnerability rankings.

The 2015 Global Climate Risk Index rated Cambodia second only to the Philippines among 160 countries in the scale of human losses from extreme weather events. A 2014 survey by Standard & Poor’s, meanwhile, singled out the country’s economy as the most vulnerable to the effects of climate change.

As governments prepare to negotiate at this week’s climate change summit, or “Conference of Parties” COP21, in Paris, Cambodia’s perilous status raises the stakes for delegates of Prime Minister Hun Sen.

For Cambodians on the front line of the shifting tides, climate change is only half the picture.

“Species disappearance is linked not only to changes in climate, but also in the local environment,” says Lek. “This includes fishing pressures, deforestation, habitat destruction and upstream developments like damming and irrigation. Everything happening in the Mekong river in China, Thailand and Vietnam has big consequences, so the most important thing is to have a coordinated, regional master plan.”

Such a strategy would mean forging consensus for regional laws among local governments, characteristically reluctant to be reined-in on economic development projects in their own backyards.

But it is these local pursuits of industry, in particular damming and Cambodia’s world-record rate of deforestation, which many say are an equal threat to communities dependent on the land.

Research by the NGO Cambodian Climate Change Network (CCCN) suggests that global factors account for only a fraction – as little as 10 percent – of the environmental insecurities confronting rural Cambodians. Instead, the disruptive activities of commercial farming and fishing are combining with widespread threats to land-tenure to enhance risks posed by climate change.

Like the contested hydroelectric dams upstream in the Mekong, many recent initiatives have been justified under the rubric of fostering clean energy and biofuels, yet have done little to promote either sustainability or stability.

Just as rural communities have been stripped of a say in such initiatives, or share in their profits, many fear they will also be powerless to influence the national climate change adaptation and mitigation schemes for which the government will open its coffers in Paris.

“Civil society and rights organisations are concerned that those who will most suffer the effects of climate change policy be represented at COP21,” says Nop Polin, a climate change adviser for NGOs DanChurchAid and Christian Aid and one of Cambodia’s civil society delegates to the Paris summit.

Polin has been consulting with officials and local communities in an effort to forge an evidence-based strategy focusing on the least empowered, but most threatened.

“We want to push the government to work not just on a national level, but also on a grassroots level, so that voices of the vulnerable are integrated into a representative policy and heard internationally,” he told Al Jazeera.

A conference of equal parties?

In Chong Kneas, where Korean tour companies ferry lucrative boatloads of tourists through villages, demarcating where local fisherman can stray, there is little sign that local concerns will win out over big industry.

“We have had no help or consultation from the government,” says Mon Bros, a young boat driver, lunching on fried carp at the home of his fisherman brother.

As Bros explains, the only official contact he has had is sighting local authorities gathering illegal timber on the lake, alongside his persistent online efforts to lobby for a crackdown on unlicensed fishing and logging.

“The fish count is so low due to illegal fishing, climate change and deforestation,” he says. “When there are no trees, there’s no rain. But the government doesn’t care.”

However, others working to equip local Cambodians with tools to address the unfolding crisis suggest that fingers might just as readily be pointed at offenders across other waters.

“The vast majority of government spending in Cambodia seems to be on creating new departments, and this is right in line with what foreign donors are providing money for – increasing government capacity,” says Courtney Work, an anthropologist from The Institute for Social Studies in The Hague, who is investigating climate change mitigation policies in Cambodia with the MOSAIC project.

Rather than questioning the actions of the Cambodian government, Work suggests that greater scrutiny could be paid to the agendas of its first-world, carbon-emitting sponsors and COP21 convenors.

“We need to look to the drivers of this project,” she told Al Jazeera, noting some international climate change funding schemes are pitched at buying carbon credits from undeveloped nations to avoid developed countries’ reducing their own carbon-intensive practices.

“Not only are they the custodians of global climate change policy, but of the catastrophe that gave rise to it. So we essentially have the foxes guarding the henhouse.”

Back on the wilting asphalt of Cambodia’s capital, a tuk-tuk driver fans himself with a baseball cap and shakes his head.

“It is too hot,” he tuts. “You know why? Because they are cutting down all the forests. They are very bad people.” 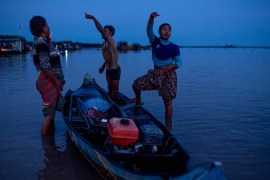 Tonle Sap Lake, one of most productive fisheries in the world, is struggling to survive over-fishing and dam projects. 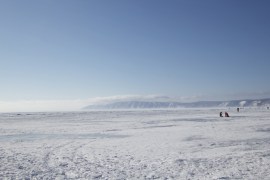 Villagers struggle to cope as world’s largest freshwater lake drops to its lowest level in 60 years.