At least seven people, including two attackers, have been killed in a twin suicide bomb attack in northern Cameroon, security sources and an official have said.

The attacks on Saturday in the village of Dabanga in Cameroon’s Far North Region are suspected to have been carried out by members of Nigeria’s armed group Boko Haram.

One of the security sources said a woman and her children were among the dead, Reuters reported.

Two other security sources said a gendarme had been killed.

Cameroon troops are part of an 8,700-strong regional task-force designed to defeat Boko Haram which has killed thousands and displaced millions of people in its bid to create a caliphate in northern Nigeria.

While authorities insist the force has been functional since August, there has been no sign of joint operations at a time when the Boko Haram armed campaign appears to be intensifying.

Two young girls reportedly detonated themselves at market killing at least 20 people in the city of Maroua. 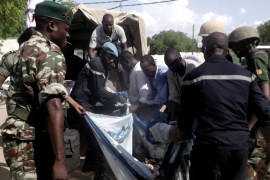