Masked assailants opened fire on police in an area between the famed Giza pyramids west of Cairo and the Saqarra pyramids to the south, the ministry said in a statement.

“Police are now combing the area in search for the perpetrators,” the ministry said on its official Facebook page.

State-run newspaper al-Ahram reported online that the attackers had escaped the scene after seizing the guns of the four slain policemen.

The Islamic State of Iraq and the Levant (ISIL) group claimed responsibility for the attack later on Saturday.

The attack came four days after seven people, including two judges, four policemen and a civilian, were killed in a bombing attack in the restive northern Sinai.

An affiliate of ISIL based in Sinai claimed responsibility for that attack.

Scores of policemen and soldiers, mostly in the Sinai peninsula, have been killed since Egypt’s army overthrew President Mohamed Morsi in 2013.

Attacks have also targeted police and government buildings in the capital, Cairo.

In a separate incident, an Egyptian military helicopter crashed on Saturday due to a “sudden technical failure” in the Ismailia province, northeast of Cairo.

Military officials said it was on a reconnaissance mission and that crew members were injured, but did not specify the number hurt or the severity of the crash. 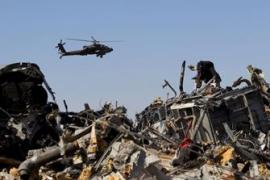 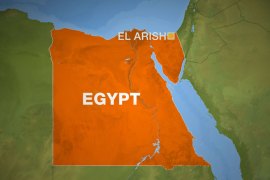