Bangladesh – At least 10 priests from different churches have received death threats in the northern Bangladeshi city of Rangpur, officials have said.

Abdullah al-Faroque, the superintendent of the Rangpur police, told Al Jazeera on Friday that the threats were issued in a single letter addressed to the pastor of the Rangpur Baptist Church.

The letter listed the names of the priests who are working at churches in the city and its surrounding areas, saying that they would be killed one by one.

“We have already begun to investigate the source of the letter,” Faroque said.

Reverend Barnabas Hemron, the pastor, received the letter on Thursday evening and alerted the local police.

The unidentified sender said Bangladesh would be governed under Muslim laws.

Faroque said the letter appeared to have been sent from the Uttarpara village of Komolpur in the Dinajpur Sadar subdistrict.

William Proloy Samadder, the organising secretary of the Bangladesh Christian Association (BCA), told Al Jazeera that the threats have not created panic, but added that security measures were being taken.

A local police station said they had deployed policemen at the Baptist church that received the letter, and that plain-clothed policemen had been stationed in the area.

According to the BCA, Bangladesh has around 3,000 churches.

About 30 priests and other clergymen across the country had restricted their movements due to previous threats, Reverend John Sagor Karmakar, assistant general secretary of Bangladesh Baptist Church Sangha, told Al Jazeera.

On October 5, Pastor Luke Sarkar escaped an attempt on his life when three men tried to slit his throat in Pabna.

Parolari is now under treatment at the Combined Military Hospital in Dhaka, while Sarkar fled his area on October 28, without informing anyone where he was going. 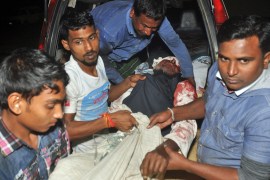 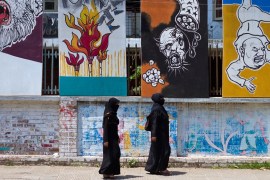 Banned right-wing Ansarullah Bangla Team reportedly says it is against Islamic law for women to work in the media.