Residents of northern Japan were surprised by an early blast of winter this week as sub-zero temperatures and heavy snow combined to cover much of Hokkaido with a white winter duvet.

One resident of the prefecture capital, Sapporo, said: “It’s a lot, a lot! Last year it snowed around November 8 but it was nothing like this”.

In this northern prefecture of Hokkaido, the lavender fields of Furano saw temperatures on Wednesday night drop to minus 21 degrees Celsius. On the same night in Sapporo, the temperature fell to minus 7C.

Sapporo first dropped below freezing on Monday night, with snow started falling in the early hours of Tuesday.

It snowed throughout the day and night so that by dawn on Wednesday, there was 44cm of fresh powder snow on the ground – this is the deepest snow to cover Sapporo since 1953.

The ski resort of Niseko, a little to the south of Sapporo, received 24cm during Tuesday, which is a good start to the season. Significantly more can be expected in the next two or three days.

Snow fell as far south as Shirakawa, halfway down Honshu, in Gifu Prefecture. Tokyo felt the chill, but has not yet had any snow as the temperature dropped to a maximum of 11C on Thursday.

This may not seem extreme, but Tokyo’s average is just over 16C for November. This year, one destined to be the warmest yet recorded globally, every day in Tokyo during November has exceeded the average temperature. 24C was reached on November 17, not far from a record high value.

Now that the winter weather has crossed the Sea of Japan, it’s likely to stay. The winter snow line has also descended into central China, Alpine Europe and the northern States of the US. 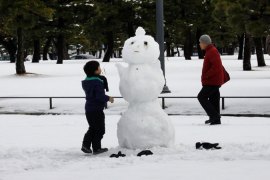