Belgium has lowered the security threat level the capital Brussels after almost a week on maximum alert following the attacks by the Islamic State of Iraq and the Levant (ISIL) group in Paris.

The decision on Thursday by the national crisis centre to downgrade the risk assessment to Level 3 – serious, a possible and probable threat – from Level 4 – a very serious, imminent threat – brought Brussels in line with the rest of the country.

“We can confirm that the Threat Analysis Coordination Agency re-evaluated the threat level from four to level three,” a spokesman for the crisis centre told the AFP news agency.

The move came just hours after firefighters and decontamination teams attended the oldest mosque in Brussels, located close to the European Union headquarters, after a suspicious powder was found there that was feared to be anthrax.

About a dozen emergency and police vehicles were seen on Thursday outside the Grand Mosque of Brussels, which houses the Islamic and Cultural Centre of Belgium, the Reuters news agency reported.

A spokeswoman for the fire service said it had taken a call from the mosque from a person saying they believed that they had found anthrax powder, prompting the deployment of specialist crews.

There was no immediate word on what the substance was.

Belgian media said envelopes of white powder had been found.

The mosque and the Saudi-established centre lie about 200 metres from the European Commission.

In a separate incident, Belgian police mounted a raid on Thursday in a small town south of Brussels, the newspaper, La Nouvelle Gazette, said on its website.

“The federal police have staged a raid in Auvelais. According to our sources, the operation is linked to the risk of attacks in Belgium,” the paper said.

Auvelais lies about 50km from the capital, which is on high alert.

Since the Paris attacks on November 13 there have been reports of threats against mosques used by Belgium’s half a million Muslims, among them some from an unknown group calling itself Christian State. 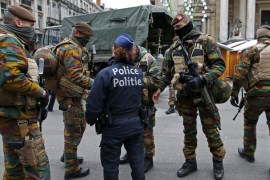 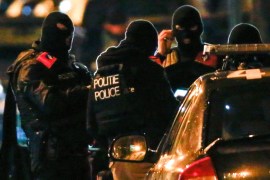