Russia’s Foreign Minister Sergey Lavrov has described the downing of a Russian warplane by Turkey as a “planned provocation” but said the two countries would not go to war over the incident.

“We have serious doubts about this being an unpremeditated act, it really looks like a planned provocation,” Lavrov said at a press conference in Moscow on Wednesday.

Lavrov, who cancelled a trip to Istanbul scheduled for Wednesday, said Moscow would seriously reconsider its relations with Ankara over the downed plane.

“Our attitude to the Turkish people has not changed. We have questions over the action of Turkey’s current leadership,” he said.

The Russian Sukhoi Su-24 warplane was shot down on Tuesday for allegedly violating Turkish airspace, angering Russia’s President Vladimir Putin, who compared the incident to being “stabbed in the back”.

One of the warplane’s two pilots was shot and killed after parachuting from the burning plane, while his crewmate was rescued by Syrian forces and delivered in good condition at a Russian airbase in Latakia province.

Speaking to Russian state media on Wednesday, the rescued pilot said that no prior warning was issued by Turkish jets.

“There was no warning, not by radio exchange nor visually. There was no contact at all,” Konstantin Murakhtin said from the Hemeimeem airbase, adding that his plane was flying over Syrian territory and did not violate Turkish airspace.

Turkey has defended itself, saying the jet had crossed into its airspace from Syria.

Speaking at an Organisation of Islamic Cooperation economy meeting in Istanbul on Wednesday, Turkey’s President Recep Tayyip Erdogan said that shooting down the plane was necessary for security, but added that his country did not want an escalation of the situation.

“Turkey is never on the side of tension or hostility. We’re always for peace and diplomacy. And we will maintain that attitude. We will not tolerate our borders being violated. And no one should expect us to. We do not have any intension to escalate any situation, we are only defending our security,” Erdogan said.

Russia’s defence ministry has announced suspension of military cooperation with Turkey, and Moscow is deploying its state-of-the-art air defence missile at the Hemeimeem airbase in Syria’s coastal province of Latakia.

Lavrov also said on Wednesday that Russia was not planning on hosting any Turkish officials, nor contemplating making any official visits to Turkey.

Meanwhile, a group of protesters hurled eggs and stones at the Turkish embassy in Moscow on Wednesday. Police cleared the area and made some arrests shortly after the demonstration began.

On Tuesday, Putin sharply criticised Turkey for establishing contact with NATO to discuss the incident,  before contacting Russia.

“Instead of immediately establishing contacts with us, as far as we know Turkey turned to its NATO partners to discuss this incident – as if we had hit their plane and not the other way around,” Putin said.

Turkish Prime Minister Ahmet Davutoglu sought to ease tensions on Wednesday, saying that Russia is Turkey’s “friend and neighbour” and insisted that relations cannot be “sacrificed to accidents of communication”.

Davutoglu told his party’s politicians on Wednesday that Turkey did not know the nationality of the plane that was brought down on Tuesday until Moscow announced it was Russian.

He again defended Turkey’s action, saying Russia was warned on several occasions that Turkey would take action in case its border is violated in line with its military rules of engagement.

Russia has been carrying out air strikes in Syria since September, saying it is targeting the Islamic State of Iraq and the Levant (ISIL) and the Nusra Front groups. 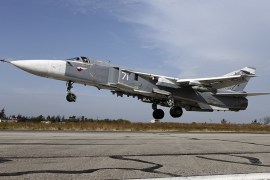 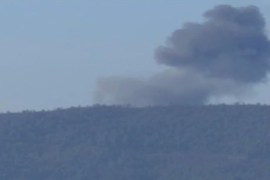 NATO and UN urge a de-escalation in tensions between Ankara and Moscow after Turkish planes shot down Russian jet. 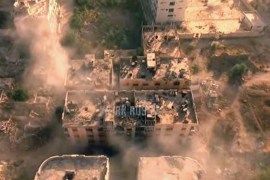