Turkey says it has shot down a Russian-made warplane on the Syrian border for violating Turkish airspace.

Two Turkish officials told Al Jazeera the plane was shot down on Tuesday by the Turkish military according to the rules of engagement.

Rebel forces have told Al Jazeera that bodies of both pilots have been recovered. It is also reported that Russian helicopters were searching for the pilots close to the Turkish-Syrian border.

The Turkish president’s office identified the warplane as Russian-made.

The Russian defence ministry acknowledged that an Su-24 fighter jet crashed in Syria as a result of fire from the ground.

The ministry was quoted by TASS Russian News Agency as saying: “A probe is in progress into the circumstances of the Russian plane crash.”

It said the plane had stayed within Syrian airspace and that “objective monitoring data confirm this”.

President Vladimir Putin’s spokesman called the downing of the warplane a “very serious incident”, but said it was too early to draw conclusions.

Ahmed Davutoglu, Turkey’s prime minister, has ordered the foreign ministry to consult NATO, the UN and related countries on the developments, his office said in a statement.

“The Turkish armed forces are clearly instructed. Even if it is a flying bird it will be intercepted,” Davutoglu had said. 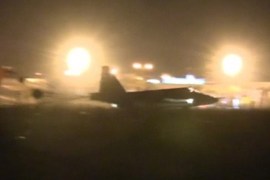