Human Rights Watch says Syrian refugees trying to enter Turkey are being pushed back as they try to cross the border.

In a report released on Monday, the New York-based rights group said Turkey has now closed all its borders to Syrian refugees and is pushing them back to Syria.

Emma Sinclair, a Turkey-based HRW researcher, told Al Jazeera that those being pushed back are being left with no choice but to use smugglers and embark on dangerous routes to enter Turkey.

“A number of Syrians have said they were pushed back at the borders once they were intercepted. People being pushed back are forced to eventually use smugglers,” she said.

“Syrians are fleeing a conflict in their country, they are fleeing constant air strikes all they want is to go to safety and claim protection.

“Turkey has every reason to be concerned about security and has the right to screen refugees, but the route it is leaving Syrians to take is dangerous.

“We are very concerned about these pushbacks. Some refugees try to enter a second and third time, and sometimes get prosecuted.”

However, Yasin Aktay, an MP with Turkey’s ruling Justice and Development Party (AKP), told Al Jazeera the claims were baseless.

He said Turkey took additional precautions and had been monitoring crossings more closely as to who was going in and out.

“Unmonitored crossings are a risk for us as it can lead to terrorists entering the country,” Aktay said.

HRW said it conducted 51 interviews with Syrians during the last two weeks of October in Antakya and Istanbul provinces about the ordeal they faced as they attempted to cross into Turkey.

They were pushed back near Turkey’s Bab al-Hawa and Bab al-Salama crossings, it said.

The vast majority told HRW that they had crossed hours and some days before being interviewed resulting in their exhaustion and weariness.

Six people told HRW they were forced back into Syria, three of them said they were arrested by Turkish border guards and forced to stay overnight in detention.

Others witnessed border guards pushing back dozens of people into Syria.

IN PICTURES: A refugee journey: All they left behind

Khaled Khoja, president of the opposition National Coalition, says the closing of borders comes as international forces are trying to clear border areas from the Islamic State of Iraq and the Levant (ISIL) group in order to create safe zones .

“We are still coordinating with the Turkish government on ways to be deliver humanitarian and medical aid into Syria,” Khoja said in Istanbul on Monday.

For his part, Aktay said Turkey was preparing to take more refugees after the recent civilian deaths across the border as a result of Russian strikes.

“People are fleeing from these attacks and Turkey is arranging more space in its refugee camps for this new flow. The Prime Ministry Disaster & Emergency Management Authority works on the issue,” Aktay told Al Jazeera.

“Turkey sees this issue as a humanitarian one and would never change its approach to it.”

The Turkish government closed its last two official border crossings in March, according to the HRW.

Turkey hosts the largest number of Syrian refugees with a figure as high as 2.2 million refugees.

The Syrian conflict began with anti-government protests in 2011 before spiralling into a multi-front war after a brutal regime crackdown.

At least 250,000 have been killed since then and an additional 11.8 million people have been displaced. 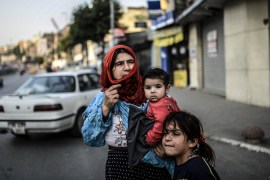 Syrians in Turkey push for coexistence

As tensions mount, a cultural centre in Istanbul is trying to bridge the gap between Syrian refugees and Turkish locals.