As thousands of Syrian refugees continue to make their way to safety across Europe, many of their countrymen left behind are finding it much more difficult to flee the war, allegedly as a result of a shift in Turkey’s border policy.

The first country to receive and embrace refugees when Syria’s civil war broke out four years ago, Turkey has maintained an open door policy for the victims of the Syrian conflict, absorbing approximately 2.2 million refugees and spending nearly 8 billion euros ($8.5bn) in the process.

Yet, according to a report published by Human Rights Watch (HRW) on Monday, Turkey has now closed every single one of its official border crossings with Syria.

Turkish border guards are now intercepting any Syrians found at or near the border and, according to the report, in some cases: “Beating them, and pushing them and dozens of others back into Syria or detaining and then summarily expelling them, along with hundreds of others.”

Turkish government never says this openly, but their end goal is to create this safety zone and even send some of the Syrians currently residing in Turkey to there, too.

The HRW team compiled testimonies from 51 Syrian refugees in the report which casts serious doubts over whether Turkey has maintained its hospitable stance towards victims of the refugee crisis.

But a Turkish official, talking to Al Jazeera, described the report as “misleading”.

“We remain committed to the open door policy, which was adopted back in 2011. We, likewise, urge governments around the world to take in refugees and IDPs [internally displaced persons],” said the official, who asked to remain unnamed.

The Turkish official, nonetheless, acknowledged that Turkish authorities have had to temporarily restrict the free movement of refugees due to security concerns in the past.

“We are, however, not implementing any restrictions at this time. The HRW report is misleading because Turkey isn’t stopping people from crossing the border,” he said.

Instead, the official added that members of the Syrian Turkmen community, who were subjected to forced migration to northern Syria before, are now too afraid to leave their lands behind.

“Many people are worried that they won’t be able to go back to their homes if they cross the border,” he said

For their part, analysts were not surprised by the HRW report’s findings. The HRW report placed the date of the change of the Turkish border policy in March of this year.

Until early March, the report says, Syrians with valid travel documents were able to cross through two official border crossing points with Syria still open at that time, the Cilvegozu crossing near Reyhanli and the Oncupinar crossing near Kilis.

But some analysts beg to differ: “Before Kobane, Turkey genuinely had an open door policy for Syrian refugees,” said Ahmet Icduygu, director of Migration Research Center at the Istanbul-based Koc University.

“Yet, when the situation in Kobane caused a crisis within Turkey, and the number of Syrian refugees residing in Turkey reached 1.5 million, the government decided to minimise the number of refugees allowed in the country; in all practical terms, Turkey’s open door policy ended there.”

Insisting that Turkey is doing its best to minimise the refugee intake for at least a year now, Icduygu pointed out that Turkey was willing to open its borders to Syrian refugees only when the pressure coming from the international community to do so was too strong to resist.

“For example, we have witnessed this when Turkey opened its borders for Yazidis.”

ANALYSIS: More of the same foreign policy under AK party

Bakri Azzin, a Syrian humanitarian worker and activist from Aleppo, who crossed the Turkish-Syrian border both legally and illegally several times in the past year, was also not surprised by the HRW report’s findings.

“When the Turkish government say that they have an open door policy, they are lying. This is definitely not true. Only doctors, some of the humanitarian workers – not all – and injured people can pass,” he said.

Noting that the Turkish border guards’ attitude towards Syrian asylum seekers changed drastically over the past year, Azzin argued that even illegal crossings, which, according to him, were relatively common and easy to achieve in the past, came to an abrupt end. The guard’s attitudes shifted significantly at the beginning of April, after they decided to close the border. “They stopped legal and illegal crossings simultaneously,” he said.

“Unlike in the past, now it is really hard to cross illegally because [before,] the Turkish police was not that bothered to close the border. People were even able to cross illegally from areas close to official gates. But now, they are shooting their guns when they see people trying to cross the border.”

Azzin made his latest crossing legally using permission obtained with the support of an NGO; he also told Al Jazeera that, in the past, while doing illegal crossings, he personally witnessed evidence to support some of the allegations in the HRW report.

“Since the beginning of April, the border was closed completely. So we had to cross illegally from Syria to Turkey and from Turkey to Syria. Last time I was crossing, about two-and-a-half months ago, Turkish jandarma [military police] was shooting towards Syrians to stop them from crossing.”

“In some cases, they were arresting the people who were crossing. They took them in for investigation that would last a day or two, and they released them back into Syria.”

Azzin also pointed out that, as a result of Turkey’s new border policy, smugglers operating on the Turkish- Syrian border have increased the fees they charge for assisting illegal crossings.

“There are still some smugglers who pay the Turkish police and get people into Turkey. But it is really rare and expensive now. Today, it would cost nearly $400 per person to pass,” he said.

While agreeing that Turkey’s decision to restrict its refugee intake has caused many people to suffer further, Icduygu said that Turkey is not under any obligation to allow everyone in.

“Turkey is exploiting a grey area of international law,” explained Icduygu, “in the same way as the European Union to limit the number of refugees they accept in their territory”.

He explained that there are no recent binding and inclusionary international documents that deal with individual states’ obligations towards refugees.

“Even though there is a consensus about the necessity of opening borders during a major refugee crisis, countries may choose, and I am not saying this to defend Turkey’s actions, to close their borders during periods of mass migration,” he said.

Pointing out that every country may reach its ‘absorption capacity’, the maximum number of refugees it can practically accommodate, Icduygu said: “If you reach a point where your social and economic resources are not sufficient to accommodate any more people, then that surely has to be said, ‘You reached your end point.'”

Turkish analysts like Icduygu believes that Turkey’s ‘end goal’ is to create a safety zone in northern Syria and eventually place a large number of refugees in this area.

“From the beginning, Turkey had been using NGOs to create camps in Syria, at least in areas where it has some sort of a control. The refugees who had been coming from the south of the country have been placed in these camps.”

This, according to Icduygu, has been a policy that nobody talked about for the last three years. Turkish NGOs, especially ones who work within a religious framework, are active in implementing this policy.

“[The] Turkish government never says this openly, but their end goal is to create this safety zone and even send some of the Syrians currently residing in Turkey to there, too.” 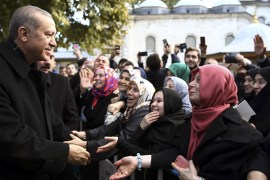 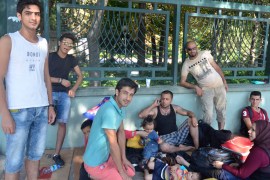