Brussels will remain under the highest level of alert for another week due to an ongoing “terrorism” threat, but schools and the underground train system could reopen from Wednesday, Belgian Prime Minister Charles Michel has said.

“The crisis centre decided to maintain the alert level four, which means the threat remains serious and imminent,” Michel told a press conference on Monday, adding the threat level will be reviewed again next Monday.

The army and police will continue to be deployed in force and the country will reduce the number of events with large crowds, for fear of a repeat of the Paris gun and suicide bomb attacks on November 13, Michel said.

But Michel added his government was trying to bring the country “back to normal as quickly as possible” while working with the security services.

“We want progressively to return to normality,” he said. “Schools in Brussels will open on Wednesday and the metro on Wednesday, too. For the metro it could be done in stages.”

The rest of the country will remain on alert level three, which means an attack is considered possible and the threat credible.

Brussels has been on locked down since Saturday with armed police and troops patrolling quiet streets.

Meanwhile, authorities are continuing to hunt for a Belgian national, Salah Abdeslam, a Belgian national suspected of involvement in the Paris attacks after arresting 21 people in late-night raids since Sunday.

Prosecutors said they had charged a fourth person with “terrorist” offences linked to the shootings and suicide bombings that killed 130 people in the French capital on November 13.

They released all 15 others detained in police raids on Sunday. Two of five people detained on Monday were also released while the other three had their custody prolonged. 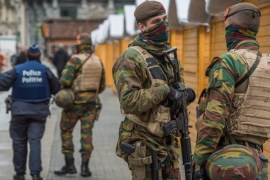 State of emergency continues in Belgian capital as police hunt one of the men believed to be behind the Paris attacks. 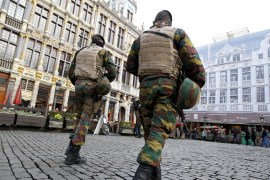 PM Charles Michel says state of emergency to continue in Belgian capital as police hunt those involved in Paris attacks. 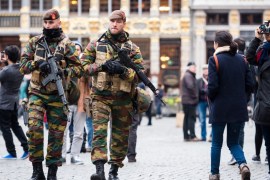