Four Israelis have been stabbed and wounded in the southern city of Kiryat Gat, prompting a search for at least one alleged attacker who was said to have fled the scene.

The incident that took place near a football stadium in the city centre was labelled as a “confirmed terrorist attack” by Micky Rosenfeld, an Israeli police spokesman.

Israel’s Magen David Adom emergency medical service said one of the four victims was in a serious condition, two were moderate and another was lightly hurt.

Israeli police said that a Bedouin man who was near the scene was beaten by a number of Israelis who thought he was the attacker. He was later hospitalised.

A new wave of unrest erupted in mid-September over tensions surrounding a Jerusalem holy site – Al-Aqsa Mosque compound – and has quickly spread into Israel, the West Bank and the Gaza Strip.

On October 7, a Palestinian stabbed a soldier and grabbed his gun in the same city, which is near Hebron, before being shot by security forces.

The wave of violence has left 86 Palestinians dead – some of them alleged assailants – as well as 15 Israelis, an American and an Eritrean.

Much of the violence has emanated from Hebron, the largest West Bank city, where hundreds of Israeli settlers live in heavily guarded enclaves.

On Saturday, the Israeli military raided a Palestinian radio station in Hebron and confiscated equipment it said was being used to broadcast calls to attack Israelis.

The military said it shut down the El-Khalil radio station overnight, marking the second time Israel has closed a Hebron station it accuses of inciting violence.

The military said El-Khalil had encouraged stabbings and glorified Palestinian attackers. It did not provide further examples of the incitement.

“They also took broadcast parts and gave us an order banning us from working for six months because they accuse us of incitement,” he said.

Dozens of people gathered outside later to support the radio station. The protesters held signs reading: “The voice of Hebron shall never be silenced.” 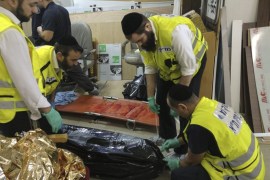 At least five dead in Israel and West Bank attacks 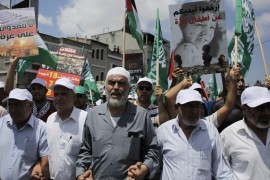