For anyone who has followed news of Mali or travelled there in recent years, Friday’s attack that killed more than 19 people at the Radisson Blu hotel is unsurprising, but no less tragic or horrific for its apparent predictability.

Since France’s military intervention in January 2013 to halt the southwards movement of a coalition of armed groups who controlled much of the country’s north, the security situation has remained precarious. And in some ways, it has gotten even worse.

The morning attack reportedly began after a small group of armed men hijacked a diplomatic car in the country’s capital, Bamako, using the vehicle’s protected status to bypass hotel security before shooting several guards, storming inside, and taking hostages.

RELATED: State of emergency in Mali after deadly hotel attack

A statement posted on Twitter claimed the attack on behalf of al-Mourabitoun, an armed group led by veteran rebel commander Moktar Belmoktar, with cooperation from al-Qaeda in the Islamic Maghreb’s (AQIM) Saharan Emirate under the command of Yahya Abou el-Hammam.

French Defence Minister Jean-Yves Le Drian told French television that Belmoktar, who was the target of a US air strike in the Libyan town of Ajdabiyah in June, “is likely behind this attack, although we are not certain of it”.

If the claim of responsibility proves true, it would not be the first attack from Belmoktar’s group in Bamako. In March, Mourabitoun claimed responsibility for an attack that killed five people at the popular La Terrace bar and restaurant in the capital’s Hippodrome neighbourhood. The group also said it was behind shots fired at a United Nations vehicle and compound.

This year alone, Mali’s violence has killed at least 342 people – including UN peacekeepers, foreign personnel and contractors, as in the attack this summer on the Byblos Hotel in the central city of Sevare.

While the rebel environment in Mali appears fragmented, the separation and scattering of fighters after the French intervention has also helped these movements remain active. Moreover, this is part of a larger pattern of dealing with conflict by separating into smaller groups built in part around ethnic, social and linguistic ties.

For instance, the Movement for Oneness and Jihad in West Africa (MUJAO) split from AQIM in 2011 – in part over frustration among Saharan and Sahelian fighters with Algerian dominance within AQIM; yet, this did not stop these groups from collaborating in the occupation of Mali in 2012.

Similarly, long-standing radical and political actor Iyad Ag Ghali’s Ansar Al-Din, created in 2011, connected Tuareg fighters from AQIM with newer recruits from Tuareg and other groups, especially in the area around the northern city of Kidal.

FLM leader Amadou Koufa was initially part of the rebel push south in 2013, before splitting off and reportedly recruiting largely among his ethnic Peul community, staging attacks in central and southern Mali and harkening back to the 19th-century Masina state established by the reformist Muslim leader, Shekou Amadou.

As AQIM, Ansar Al-Din, and Belmoktar’s fighters scattered after the French intervention, other rebels relocated or simply returned home to bide their time. But the fighting never stopped, and in the past year in particular, these groups have returned to the fore and expanded their combat operations across Mali, even as French forces fanned out across the Sahel as part of Operation Barkhane, designed to combat armed groups across the region.

Rebels target UN and other convoys almost daily with improvised explosive devices, while AQIM fighters killed six UN peacekeepers in a complex attack near Timbuktu in June. Other attacks in the region of Mopti, as well as near the borders with Burkina Faso and the Ivory Coast, have been attributed to the FLM or groups associated with Ansar Al-Din.

Like water thrown onto an oil fire, the flames have simply spread elsewhere, instead of being extinguished.

RELATED: State of emergency in Mali after deadly hotel attack

Although Friday’s attack follows closely on the heels of last week’s gun and bomb assaults that killed at least 129 people in the streets of Paris, it is more likely that the carnage at the Radisson Blu was tied to local factors.

The hotel, always popular with diplomats and other foreign personnel, was preparing for the sixth meeting of the Coordinating Committee of the Algiers Accords, signed in June between rebel groups and the Malian government.

The attack also takes place soon after a series of local truces around the town of Anefis brought a halt – for the moment – the intercommunal conflict between different Tuareg and Arab armed groups that had raged since the signing of the Algiers Accords.

We will know more in the days to come about why and how this attack took place. But no matter what the cause, it appears dishearteningly likely that insecurity and violence will continue to spread in Mali for the foreseeable future.

Andrew Lebovich is a Visiting Fellow with the European Council on Foreign Relations and a PhD student in African History at Columbia University. 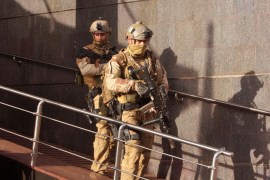 President Keita announces 21 people killed in brazen attack on luxury hotel in Bamako with three suspects on the run. 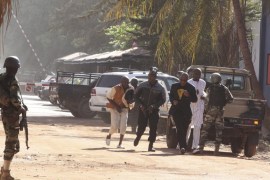 Mali state television reports that at least 27 people were killed in assault on Radisson Blu hotel.