A former senior intelligence officer in Britain’s MI6 intelligence agency says air strikes against the Islamic State of Iraq and the Levant (ISIL) will “absolutely not” eliminate them.

Richard Barrett, who also served as head of the UN’s Monitoring Team on al-Qaeda and the Taliban between 2004 and 2013, instead believes that defeating ISIL needs a war of ideas.

You cannot necessarily bring all the enemies of ISIL together and say, well, that is a viable coalition.

“It is possible to think that you could go in there and you could just knock them out, you could weaken them so much that they would just have to go underground,” he said, during his appearance on the Upfront programme.

“But the idea that ISIL thrives on – the idea behind ISIL – I don’t think is going to be defeated any time soon at all, that requires much more work and a much longer term, much more generational-type struggle.”

Both a US-led coalition – which includes France and other European and Arab States – and Russia are bombing parts of Syria that they say house ISIL targets.

Barrett said that any potential France-US alliance with Russia and its ally Syrian President Bashar al-Assad would be a flawed strategy.

“The thing is much more complicated than that,” Barrett said. “You cannot necessarily bring all the enemies of ISIL together and say, well, that is a viable coalition.”

OPINION: Without initiative, Paris attacks will change nothing

In the wake of last week’s attacks in Paris, the French government announced it was intensifying air strikes on Raqqa, ISIL’s de facto capital.

Barrett said that, though France’s move was understandable from a political perspective as a reaction to the attacks, it “inevitably… will make [France] probably more of a target, if that’s possible”.

Air strikes, argued Barrett, are “certainly not going to be something that stops the Islamic State trying to attack in France and whether it will reduce its capability to do so, I’m not sure either.”

In the interview, the former MI6 officer also suggested that the objective behind the Paris attacks was to polarise societies.

“The whole point of terrorism I believe, particularly the form we’re seeing in Syria, is to force people off the fence,” Barrett said.

“The whole point of terrorism … is to force people off the fence.You have to take sides. You’re either with those people or you’re with us. And that polarisation of society is a very important element of the Islamic State strategy.”

When asked if the invasion of Iraq was linked to the rise of ISIL, Barrett acknowledged: “There’s a very, very clear link.”

For Barrett, “there’s a clear linear progression” from al-Qaeda in Iraq to ISIL.

Watch UpFront on Al Jazeera English on Friday at 19:30GMT. 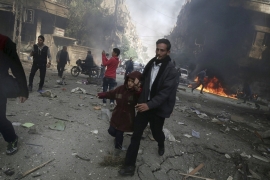 ISIL and the West: A clash of savageries

Once again, the West is using heart-wrenching scenes of loss and sorrow to win support for its misguided war on terror.