A suspected fighter from the Islamic State of Iraq and the Levant (ISIL) group has been killed while trying to illegally cross into Turkey from Syria, Turkey’s military has said.

A brief statement on Wednesday said the incident happened on Tuesday, in Kilis province, which borders Syria.

The army said that 21 other people were also detained during the incident, nine of them children.

Turkey has reinforced its 900km border with Syria and has tightened controls in an attempt to stem infiltrations by ISIL fighters.

Counterterror police detained the suspects in Istanbul’s Ataturk Airport after they flew in from the Moroccan city of Casablanca on Tuesday, the official Anatolia news agency reported.

The police said they found a handwritten note on one of the suspects detailing a route from Istanbul to Germany via Greece, Serbia and Hungary, including smuggler boats across the Mediterranean Sea, as well as several train and bus journeys.

The eight men told police that they were tourists who had been planning to spend a few days in Istanbul and had booked rooms at a hotel, but no reservations were found under their names.

Friday’s attacks in Paris have shone a security spotlight on the refugee trail, with some commentators expressing fears that it could be used by ISIL as a route into Europe.

The United Nations High Commissioner for Refugees warned on Tuesday against blaming refugees for the attack.

Antonio Guterres, who spoke at a refugee camp in Serbia, said “there’s every day 5,000 to 7,000 people here, women and children fleeing violence … it would be totally unfair to blame refugees”. 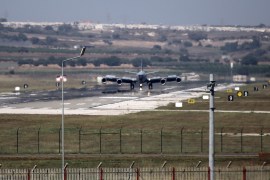 US says Turkey needs to do more in fight against ISIL

US Defence Secretary welcomes decision to let US jets use Turkish bases but urges NATO ally to take part in airstrikes.