By Clothilde Le Coz

Phnom Penh, Cambodia – A debate on whether the Khmer Rouge committed genocide against Cambodian Muslims during the 1970s continues after a UN war crimes tribunal resumed this week.

A large number of ethnic Cham, mostly Shia Muslims, were killed during the horrific Khmer Rouge rule from 1975-79 with some death toll estimates ranging from 100,000 to as high as 500,000.

In total, at least 1.7 million people were killed or died during the period through execution, starvation, and disease.

In recent months, the UN tribunal has held hearings on genocide charges levelled against Khmer Rouge chief ideologist Nuon Chea – also known as “Brother Number 2” – and former head of state Khieu Samphan over the killings of the Cham and ethnic Vietnamese in the country.

The tribunal found both men guilty of crimes against humanity and sentenced them to life imprisonment in August 2014. Nuon Chea and Khieu Samphan have denied the genocide charges against them and appealed.

The legal defination of “genocide” refers to the intention of eliminating a group of people based on their race, religion, ethnicity or nationality.

Hearings held in September and October saw Cham witnesses give frightful testimonies of the persecution they endured under the Khmer Rouge.

The Muslim Cham were rounded up by Khmer Rouge forces, forced to eat pork, and banned from using their traditional language. Qurans were collected and burned.

During the trial, one witness, Sates No, 57, recalled Khmer Rouge soldiers separating Khmer and Cham people. One day, she testified, 300 women were tied up.

“[The soldiers] asked us if we were Cham or Khmer. If anybody answered she was Cham, she would be taken away… All those who said they were Cham were escorted and disappeared.”

Sates No lied to the Khmer Rouge soldiers to make them believe she was Khmer. “I said so for I was hopeless at that time and I did not want to be killed,” she said, recalling seeing corpses floating in circles in the river. “It was as if the souls of the dead did not want to vanish.”

The groups said the UN tribunal had failed to guarantee the most fundamental aspect of a criminal trial: a systematic application of the elements of crimes to a well-documented body of factual findings.

Victor Koppe, Nuon Chea’s defence lawyer, responded to the report’s release, saying: “It’s very satisfying to realise I’m not the only one thinking this institution is a complete farce.”

While the report did not make conclusions about the guilt of the accused, it said “the serious shortcomings of the judgment cannot be ignored”, and raised concern about the outcomes of subsequent trials held by the tribunal.

For its part, documents used by the prosecution include orders given by the Khmer Rouge government in 1979 that stated: “The Cham nation no longer exists on Kampuchean [Cambodian] soil belonging to the Khmer.

“Accordingly, Cham nationality, language, customs and religious beliefs must be immediately abolished. Those who fail to obey this order will suffer all the consequences for their acts of opposition to Angkar [the Khmer Rouge high command].”

Farina So, who heads the Cham Oral History project run by the Documentation Centre of Cambodia, has recorded the experiences and coping strategies used by Cham Muslim survivors of the Khmer Rouge regime.

She said the regime did intend to eliminate the Cham. “Of course, the Chams were not the only group to suffer during the regime… But the motives seem to be quite different.”

Although the Khmer Rouge banned the practice of religion in general, So said the regime’s prohibiting the use of the Cham dialect, its destruction of mosques, and killing of the Grand Mufti, the leader of Cambodia’s Muslim community, showed that the Khmer Rouge regime branded Chams as their enemy.

However, Koppe argued that a genocide did not occur, and the Cham killings took place only at a local level after Cham resistance emerged in two villages in eastern Cambodia in September and October 1975.

The two rebellions were put down by Khmer Rouge fighters.

“This Cham rebellion was crushed pretty severely… and the ones responsible for it are, among others, Cambodia’s current prime minister and a senior senator [Ouk Bunchhoeun],” Koppe alleged.

Attempts for comment from Hun Sen and Ouk Bunchhoeun were unsuccessful. The two have been repeatedly been asked to testify but they have not done so.

A Human Rights Watch report published earlier this year noted that Hun Sen was a Khmer Rouge commander in parts of Cambodia where atrocities were committed against the Cham.

During the hearings, Khmer Rouge cadres testified there was “no plan to purge Cham people”, despite earlier testimonies.

The court resumed this week to rule on the appeals. Nuon Chea  asked the court to invalidate the judgment, while Khieu Samphan demanded his sentence be reversed and he be released.

On Tuesday, however, proceedings at the tribunal were stalled following a statement from Nuon Chea read out by his co-lawyer Sun Arun.

“From day one, it was my strong impression that this tribunal was not at all interested in exploring the truth,” the former Khmer regime leader said. “Instead it seems to operate as though its mission was simply to indulge the instructions of a handful of officials in power, and tell a tale approved by the government before the tribunal was established.” 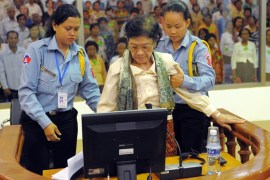 Accused of genocide in Cambodia, senior Khmer Rouge regime member dies at 83 in one of group’s last strongholds. 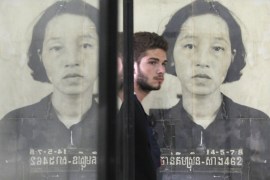 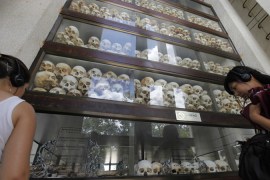