Two suspects linked to the attacks in Paris have died after police raided an apartment in a northern suburb of the French capital, a prosecutor said.

Paris prosecutor Francois Molins said on Wednesday that investigators could not at this point identify the dead, adding that the suspected ringleader behind the attacks, Abdelhamid Abaaoud, was not arrested in the operation.

Abaaoud’s fate remains unclear. The Belgian national is a key suspect in Friday’s attacks, in which at least 129 people were killed.

In a press conference, Molins said eight people, including seven men and a woman, were arrested in Saint-Denis early on Wednesday.

Forensic experts were examining the apartment after a female suspect killed herself by detonating a vest rigged with explosives at the start of the raid, Molins said.

One image taken during the raid showed heavily armed police hauling away a naked man from the building at the centre of the raid.

Molins said more than 5,000 bullets were fired by police during the operation.

Three people were wounded in the shootout at the apartment, he added.

Speaking at an assembly of French mayors, President François Hollande called for a larger coalition against the Islamic State of Iraq and the Levant (ISIL), which has claimed responsibility for the attacks in Paris.

Hollande also confirmed that a “dangerous and heavy” police operation had ended with the deaths and arrests.

“It was aimed at neutralising last night the terrorists based in Saint-Denis who are linked to the authors of the attacks and awful crimes of Friday night,” Hollande said on Wednesday.

“Two of the terrorists have died in the raid. There have been arrests. I can imagine the anguish which took hold of the residents of Saint-Denis in the early hours of the morning and I salute their calmness.

“I want to also express all my solidarity with the guards of the Mayor of Saint-Denis who already experienced the attack close to Stade de France on Friday.”

Residents of the area in northern Paris first reported hearing bursts of gunfire at 4:30am (3:30 GMT) as police exchanged fire with the suspects.

After a short lull in the operation, at least seven explosions were heard at 6:30 GMT, with more blasts reported later in the morning as a standoff ensued. 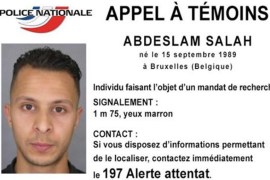