The number of young boys being sexually abused in Pakistan has increased this year, according to a new report, with more boys being targeted than girls.

The total number increased by 4.3 percent in the first half of 2015 compared to the same period last year, said the study, which was published on Wednesday by Sahil, an NGO fighting child sex abuse in Pakistan.

The report said 178 boys aged six to 10 were abused, compared to 150 girls in the same age range.

“Young boys are exposed to such crimes because they play in the streets and spend more time outdoors as compared to young girls,” he said.

The number of female perpetrators of assaults has also increased, with the report saying that 102 cases of child sex abuse from January to June of this year involved “female abettors” – five times as many as the same period in 2014.

Last year Sahil recorded more than 3,500 registered cases in total, with a spokesman saying the true figure could be as high as 10,000.

“We try our best to counsel those children who are sexually abused at a very young age,” Gohar told Al Jazeera. “We also assign lawyers to fight these cases and to make sure the culprits are punished.”

Earlier this month, Pakistan took a step towards punishing those guilty of abusing young girls with life imprisonment – or even the death penalty – after an influential parliamentary committee voted to amend current laws.

But the amendment only appears to address the sexual abuse of girls aged under 14, not boys.

In August, the biggest child abuse case in Pakistan’s history was uncovered, involving nearly 300 children who lawyers said were filmed while abused and their parents subsequently blackmailed. 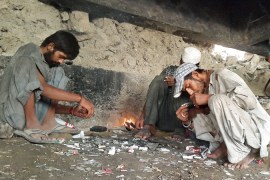 With more than six million drug users and rising, can Pakistan win its fight against the billion-dollar narcotics trade?

Child heroin addicts on the rise in Pakistan

An increasing number of children in Pakistan are addicted to heroin.