The Russian intelligence service says that a Metrojet airliner that went down over Egypt’s Sinai peninsula in October was brought down by a bomb.

The Russian Security Service (FSB) said on Tuesday that traces of explosives were found among the debris, after weeks of speculation about what had caused the crash that killed 224 people.

The state-owned Sputnik News website quoted the FSB’s chief, Alexander Bortnikov, as saying the plane had “definitely” been downed intentionally.

“We can definitely say this was a terrorist attack,” Bortnikov is reported to have said, adding that 1kg of a TNT equivalent had been used to blow up the Airbus A321 travelling from Sharm el-Sheikh to St Petersburg in Russia.

Bortnikov was meeting Russia’s President Vladimir Putin, who said that those behind the attack would be held responsible.

“We will search for them anywhere they might hide. We will find them in any part of the world and punish them,” Putin said.

Russian officials announced a $50m reward for information leading to the arrest of those responsible for the downing of the plane.

An Egyptian minister said if a security lapse had occurred, those responsible will be punished. Civil Aviation Minister Hossam Kamal said that the Egyptian investigating committee has not yet found any proof that a “criminal act” was behind the crash.

“People are asking how long the Russians have known this … clearly Russia’s actions over the past few weeks have given the impression that they strongly suspected this plane was brought out of the sky by an explosive,” our correspondent said, referring to Moscow’s decision to stop flights into and out of Egypt.

For weeks following the crash on October 31 there was speculation about what had brought the plane down, with the Islamic State of Iraq and the Levant (ISIL) group posting a claim of responsibility shortly after the incident.

Metrojet ruled out technical fault with the plane shortly after ISIL’s claim, and Western politicians and intelligence officials suggested it was likely a deliberate explosion had brought the airliner down.

OPINION: What brought the Russian airliner down?

The suggestions of an intentional attack were dismissed by Egypt and Russia as speculation, as their investigators continued their work.

Sinai is home to ISIL’s Sinai Province affiliate, which has carried out frequent attacks against Egyptian security forces and officials.

Observers suggested that the group may have taken advantage of lax security at Sharm el-Sheikh airport, or used an insider to place the explosive. 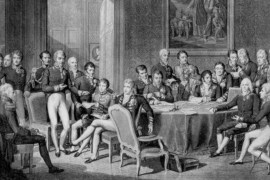 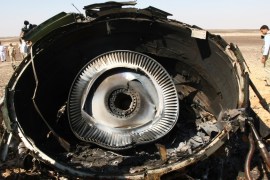