A senior Turkish official says Ankara shared information with France about one of the Paris attackers twice over the past year, but did not hear back from French authorities.

A number of countries – including France, Belgium and Turkey – continued on Monday to examine the security shortfalls that allowed Friday’s deadly attacks to occur around the French capital.

The attacks, claimed by the Islamic State of Iraq and the Levant (ISIL) group, killed at least 129 people and wounded more than 350.

A senior Turkish official provided background information to Al Jazeera on Monday about one of the attackers, 29-year-old Paris native Omar Ismail Mostefai, who died in the attack on the Bataclan concert hall on Friday night.

The official said Mostefai entered Turkey in 2013, and that there was no record of him ever leaving.

In October 2014, France asked for information from Turkish intelligence about four “terror suspects”, the official said, adding that during their investigation, Turkish authorities identified Mostefai as a fifth suspect.

Turkish authorities “notified their French counterparts twice – in December 2014 and June 2015 [about Mostefai],” the official said.

“We have, however, not heard back from France on the matter. It was only after the Paris attacks that the Turkish authorities received an information request about Omar Ismail Mostefai from Turkey.”

The same information has apparently been provided to a number of news outlets, as Turkey continues to push for greater intelligence sharing.

“This is not a time to play the blame game, but we are compelled to share the above information to shed light on Omar Ismail Mostefai’s travel history,” the official told Al Jazeera.

RELATED: Arab cartoonists pick up their pens for Paris

“The case … clearly establishes that intelligence sharing and effective communication are crucial to counterterrorism efforts. The Turkish government expects closer cooperation from its allies in the future.”

In a speech at the G20 summit on Monday, Turkish President Recep Tayyip Erdogan urged deeper intelligence sharing among those in attendance.

Questions over security and intelligence sharing came as police in France and Belgium continue to hunt for suspects they believe were involved in the recent attacks in Paris.

A French official on Monday identified the suspected mastermind of the attacks as Belgian Abdelhamid Abaaoud. The 27-year-old is known to security forces after appearing in ISIL videos and is currently thought to be in Syria.

French police have also released a photo of a key suspect, 26-year-old French citizen Salah Abdelsalam, who was born in Brussels.

French police have raided 168 locations across the country and detained 23 people accused of being members of a sleeper cell behind the Paris attacks.

He added that the raids are “just a start” to France’s response to the Paris attacks and “the response of the Republic will be huge, will be total”.

The government there has increased the threat level for major public events, which is likely to result in heightened security, including a military presence. 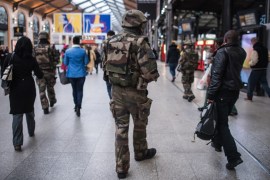 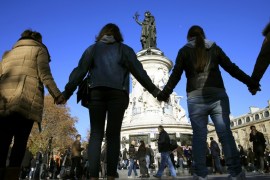 Country enters second day of mourning as police make arrests and find weapons in a car abandoned in Paris suburb.