The two contenders for Argentina’s presidency have clashed in a TV debate in advance of a run-off election scheduled for Saturday.

Daniel Scioli and Mauricio Macri locked horns in the capital Buenos Aires on Sunday to discuss economic reform and other issues, after a debate on Saturday was cancelled out of respect for victims of the Paris attacks.

Scioli, who belongs to incumbent President Cristina Fernandez Kirchner’s left-leaning Front for Victory, gained 35 percent of the ballot in the first-first round of voting, falling short of the 45 percent needed to win outright.

Al Jazeera’s Teresa Bo, reporting from Buenos Aires, said it was difficult to say who came out on top.

Adrian Bono, a journalist, described the debate as “historic”, saying it would be remembered by Argentinians for a long time.

“Millions of people at home were watching, tweeting about it, and commenting on Facebook, that’s one thing,” he told Al Jazeera.

“The other, we saw the candidates in positions we were not expecting them to see. Daniel Scioli was at some points uncomfortable even though we expected him to be feisty. He was very tired.

“Macri, who according to some polls is the leading candidate, who was expected to be very peaceful and not attacking very much, was very feisty.”

Kirchner, who has been in power in the Latin American nation since 2007, has reached her two-term constitutional limit and is standing down. 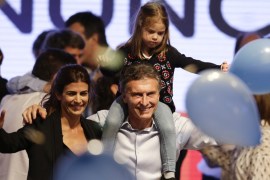 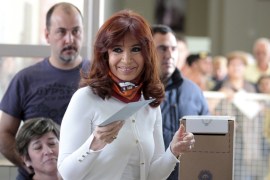 Country could be headed for its first-ever runoff as pre-election polls suggest no candidate will win outright majority.