Police in France and Belgium are still hunting for a suspect they believe was involved in the recent attacks in Paris that killed at least 129 people, as they carry out raids across the two countries that have so far resulted in arrests and seizing amunition.

French police raided 168 locations across the country and detained 23 people accused of being members of a sleeper cell behind the Paris attacks.

He added that the raids are “just a start” to France’s response to the Paris attacks and “the response of the Republic will be huge, will be total”.

Heavily armed Belgian police also launched a major operation in the Molenbeek neighbourhood in Brussels. Several of the suspected attackers have links to France or Belgium.

The government there has increased the threat level for major public events, which is likely to result in heightened security, including a military presence.

French police released a photo of one suspect yet to be found – 26-year-old Salah Abdelsalam, born in Brussels.

Abdeslam was reportedly stopped and questioned by police at the French-Belgian border before he was allowed through.

He is the brother of alleged attacker Brahim Abdelsalam, who was killed on Friday in Paris.

Salah Abdelsalam was suspected of renting the car that delivered attackers to the Bataclan concert hall where more than 80 people were killed.

A third Abdelsalam brother was also arrested but freed on Monday, with his lawyer telling AP that her client “hadn’t made the same life choice”.

RELATED: ‘You’re in a bar, then there are dead people’

Manuel Valls, the French prime minister, told RTL radio: “We know that operations were being prepared and are still being prepared, not only against France but other European countries, too.”

He added that France was “making use of the legal framework of the state of emergency to question people who are part of the radical jihadist movement … and all those who advocate hate of the republic”.

Stepping up their hunt for information, authorities found several AK-47 assault rifles in the back of an abandoned SEAT car in an eastern suburb of Paris.

French police had earlier identified Omar Ismail Mostefai, a 29-year-old Paris native, as one of the attackers.

Mostefai’s detached finger was found overnight at the Bataclan concert hall, the scene of the bloodiest attack where the alleged attacker also died.

The French citizen had been known to police for his alleged links to armed groups but had not been previously linked to violent activities.

Police are also holding six of the man’s relatives.

French authorities believe the attacks were planned abroad by ISIL, but have not yet confirmed the identities of others involved.

ISIL purportedly claimed responsibility for the attacks shortly after the incident but has not revealed the identities of the attackers.

Greek authorities confirmed that the holder of a Syrian passport found near the body of an armed man who died in the attacks had registered as a refugee on the island of Leros in October.

The attacks have intensified debate on Europe’s response to the refugee crisis. Marie Le Pen, the leader of France’s far-right National Front party, has called for an “immediate halt” to the intake of refugees. 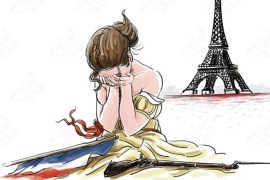 Arab cartoonists pick up their pens for Paris

Many artists shared their sympathy with France after the attacks that killed at least 129 people in Paris. 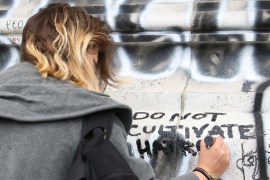