Leaders of the world’s 20 major economies (G20) have pledged a renewed fight against the Islamic State of Iraq and the Levant (ISIL) group, but offered little details on how the strategy would change.

The leaders are meeting in Antalya, a heavily guarded Turkish resort on the Aegean Sea coast, for a two-day summit also expected to be dominated by the refugee crisis.

Although the G20 usually focuses on economic issues, the president of host country Turkey, Recep Tayyip Erdogan, has urged world leaders to prioritise the battle against ISIL, saying Friday’s assaults in Paris, claimed by ISIL, proved that the time for words was now over.

The attacks left at least 129 people dead and more than 350 others injured, 99 of them seriously.

ISIL also claimed responsibility for a bombing in Beirut, Lebanon that killed at least 43 people on Thursday.

“We are confronted with a collective terrorism activity around the world.  As you know, terrorism does not recognise any religion, any race, any nation, or any country,” he said.

US President Barack Obama, meanwhile, affirmed Washington’s support for Paris in the wake of the attacks, saying: “We stand in solidarity with them [France] in hunting down the perpetrators of this crime and bringing them to justice.”

He pledged to “redouble” US efforts to eliminate ISIL, but offered no details about what the US or its coalition partners might do to step up its assault against the group.

At the G20 summit on Sunday, leaders agreed in a draft communique that the crisis is a global problem that must be addressed in a coordinated way.

“We call upon all states to contribute to responding to this crisis, and share in the burdens associated with it,” it reads, according to Reuters.

The draft communique states that tackling the refugee crisis means proactive measures, “including through refugee resettlement, other forms of humanitarian admission, humanitarian aid and efforts to ensure that refugees can access services, education and livelihood opportunities”.

French President Francois Hollande cancelled his attendance at the summit, and sent Laurent Fabius, the Foreign Minister, to represent him.

The attacks in Paris prompted a worldwide alert and called for a stepped-up offensive against ISIL.
The US already expects France to retaliate by taking on a larger role in the US-led coalition’s bombing campaign against ISIL.

Obama is also seeking to persuade other European and Middle Eastern countries into more tangible steps to show their military commitment, a US official said before Obama embarked on his nine-day foreign trip.

The summit in Antalya brings Obama and fellow world leaders just 500km from Syria, where a four-and-a-half-year conflict has transformed ISIL into a global security threat and prompted Europe’s largest migration flows in decades. 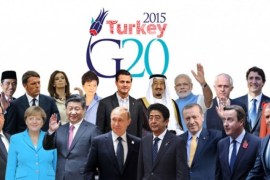 Among other objectives, the aim of the summit is to pave the way for a road map on addressing urgent global issues. 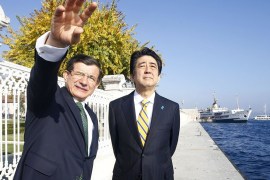 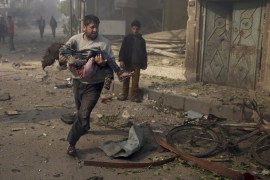 ‘From another planet’: Syrians react to peace plan

Agreement on ceasefire and elections announced by world leaders in Vienna receives lukewarm reception from activists.