A state of emergency has been declared across France after attacks in Paris killed at least 128 people, in what President Francois Holland said was an “act of war” organised by the Islamic State of Iraq and the Levant (ISIL) group.

The gunmen detonated explosive belts and dozens of shocked survivors were rescued. The attackers were killed at the site and a manhunt is under way as a number of armed men are believed to be at large.

About 40 more people were killed in five other attacks in the Paris region, officials said, including an apparent triple suicide bombing outside the national stadium, Stade de France.

Hollande and the German foreign minister were watching a friendly football match between France and Germany there when the attacks occurred.

The coordinated assault came as France, a member of the US-led coalition waging air strikes against ISIL fighters in Syria and Iraq, was on high alert for attacks.

The ISIL group released an undated video on Saturday threatening to attack France if bombings of its fighters in the Middle East continued.

The group’s foreign media arm, Al-Hayat Media Centre, made the threat through a man who called on French Muslims to carry out attacks.

“As long as you keep bombing you will not live in peace. You will even fear travelling to the market,” said the bearded Arabic-speaking man, flanked by others.

Paris Public Prosecutor Francois Molins said the death toll was at least 128 and that about 200 people were injured, 90 of them seriously.

His spokeswoman said eight assailants had also died, seven of whom had blown themselves up with explosive belts at various locations, while one had been shot dead by police.

As France awakened on Saturday, security was tight across the capital, where about 1,500 soldiers were deployed, leave was cancelled for police personnel and hospitals recalled staff to cope with the casualties.

Three restaurants and a shopping centre were also targeted in shooting attacks.

Reports also said that Paris has cancelled all public transportation services including the Metro on Saturday, as French newspapers decried a “War in the heart of Paris” with black mastheads.

The deadliest attack was on the Bataclan, a popular concert venue where the California rock group Eagles of Death Metal was performing.

The concert hall is just a few hundred metres from the former offices of the satirical weekly Charlie Hebdo, target of a deadly attack by gunmen in January.

Some witnesses in the hall said they heard the gunmen shout Islamic chants and slogans condemning France’s role in Syria.

“It was carnage in that concert hall,” freelance journalist John Laurenson told Al Jazeera from Paris, adding that the death toll was higher than initially announced.

Julien Pearce, a journalist from Europe 1 radio, was inside the concert hall when the shooting began.

In an eye witness report posted on the station’s website, Pearce said several very young individuals, who were not wearing masks, entered the hall during the concert, armed with Kalashnikov assault rifles and started “blindly shooting at the crowd”.

“There were bodies everywhere,” he said.

The gunmen shot their victims in the back, finishing some off at point-blank range before reloading their guns and firing again, Pearce said, after escaping into the street by a stage door, carrying a wounded girl on his shoulder.

In a separate incident, police said a gunman opened fire with a Kalashnikov at a Cambodian restaurant called Le Petit Cambodge late on Friday, killing at least 14 people who were sitting at the outdoor terrace in the popular Charonne area in the capital’s 10th district.

The prosecutor mentioned five locations in close proximity where shootings took place around the same time.

Residents in Paris were asked to stay indoors as attackers could still be on the loose, French media reported.

Al Jazeera’s Jacky Rowland, reporting from Paris, said: “Certainly from the very first moment the police were searching from various other bars and restaurants they were asking people to clear out bars and restaurants in the area. Clearly, police are very concerned about other potential targets.”

In pictures: Paris rocked by multiple attacks across the city

Police evacuated people from all bars and restaurants in the area of the 10th and 11th arrondissement, a part of Paris popular with young people and tourists.

Madeline Berry, who was dining at a restaurant in the area, told Al Jazeera: “I was just having dinner with some friends. All the sudden we noticed people moving to the back of the restaurant.

Two explosions were heard near the Stade de France in the northern suburb of Saint-Denis, where the France-Germany friendly soccer match was being played. The blasts were audible on television during the live broadcast.

A witness said one of the detonations blew people into the air outside a McDonald’s restaurant opposite the stadium.

The match continued until the end, but panic broke out in the crowd as rumours of the attack spread, and spectators were held in the stadium and assembled spontaneously on the pitch.

Police helicopters circled the stadium as Hollande was rushed back to the interior ministry to deal with the situation.

“We have, on my decision, mobilised all forces possible to neutralise the terrorists and make all concerned areas safe. I have also asked for military reinforcements. They are currently in the Paris area, to ensure that no new attack can take place,” Hollande said in a television statement after an emergency cabinet meeting.

US President Barack Obama called the attacks in Paris “outrageous” and said the US was united with France.

“We stand prepared and ready to provide whatever assistance that the government and the people of France need,” he said, and pledged to “bring these terrorists to justice and go after any terrorist networks” involved.

“Those who think that they can terrorise the people of France or the values that they stand for are wrong,” Obama said.

British Prime Minister David Cameron said he was “shocked” by the events in Paris.

“Our thoughts and prayers are with the French people. We will do whatever we can to help,” he wrote on Twitter.

German Chancellor Angela Merkel said she was “profoundly shocked” by the attacks.

“At this time, my thoughts are with the victims of these apparently terrorist attacks, and with their families and all residents of Paris,” Merkel said in a statement.

Speaking to Al Jazeera from Pennsylvania, Malcolm Nance, a security and intelligence consultant, said it was likely that either IISIL or al-Qaeda was behind the attacks.

“We shouldn’t lose sight of the fact that this is actually an occurrence almost every day throughout the Middle East and sub-Saharan Africa. We just had an attack in Beirut which killed almost 40 people; we had a bombing of a Russian airliner over Egypt,” he said.

“These mass-casualty attacks are hallmarks of al-Qaeda and the ISIL organisation. It appears now that the battlefront has moved from the Middle East and is now at the forefront of the Atlantic Ocean.” 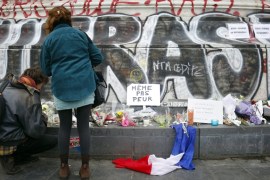 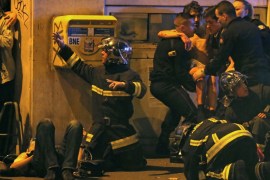 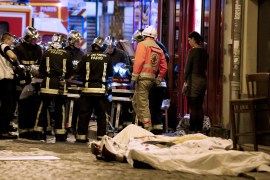