A Cambodian court has ordered the arrest of opposition leader Sam Rainsy in connection with a seven-year-old defamation case amid fresh political tensions between him and Hun Sen, the prime minister.

The arrest warrant was issued on Friday, a day after Hun Sen threatened Rainsy with a lawsuit for calling on the international community to pressure him to move towards a peaceful exit from office.

Hun Sen, who has been in power for almost three decades, called Rainsy the “son of a traitor” after he said in Tokyo that Myanmar’s historic elections foreshadowed the downfall of Hun Sen.

“I cannot keep calm because of this insult by the son of a traitor,” Hun Sen wrote on his Facebook page.

Eng Chhay Eang, an opposition legislator, said the arrest warrant is a “new threat” from Hun Sen and is aimed at forcing Rainsy out of the country to leave the party leaderless in advance of the 2017 village elections and the 2018 national elections.

“This a politically motivated warrant. It is not about exercising the court’s verdict because Sam Rainsy has been living freely [in Cambodia] for nearly three years,” Eng Chhay Eang was quoted as saying by The Associated Press.

Rainsy was ordered to be arrested in connection with a defamation and incitement case brought by Hor Namhong, the foreign minister, in 2008.

In a speech, Rainsy had accused Namhong of colluding with the Khmer Rouge while being held as a prisoner by the group.

The Phnom Penh Municipal Court convicted Rainsy and sentenced him to two years in jail. Rainsy appealed but lost in 2013.

The conviction was never enforced, and he continued to live freely in Cambodia, serving as the leader of his party in parliament.

It is not clear if Rainsy will actually be arrested since he has parliamentary immunity due to his status as a member of parliament.

He is scheduled to return on November 16.

In Washington, Mark Toner, state department spokesperson, said the timing of the charges against Rainsy gave the appearance of political influence in the judicial process and called for the charges to be dropped.

He said the US is deeply concerned about the deteriorating political climate in Cambodia, including recent assaults against two opposition politicians.

“The pattern of actions against the opposition suggests a return to the harsh political practises and tactics that the Cambodian people have made clear they no longer want,” Toner said. 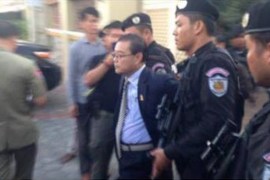 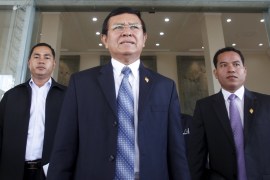 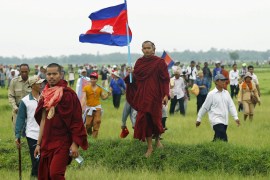