Beirut, Lebanon – A national day of mourning was held Friday after two suicide bombers on motorcycles killed at least 43 people and wounded more than 200 others in a predominantly Shia area of southern Beirut.

The Islamic State of Iraq and the Levant (ISIL) claimed responsibility for one of the worst attacks in years in Lebanon.

“They targeted this place because they don’t have any other way to fight us,” Fouad Khaddam, a witness at the scene, told Al Jazeera. “They have run out of options … They targeted this area because we are Shia. But let me be clear: We won’t be fazed.”

“Soldiers of the Caliphate” were responsible for the attack, according to a statement allegedly posted by ISIL, which was published a few hours after Thursday’s blasts.

The health ministry and the Lebanese army said the body of a third suicide bomber was found at the scene of the attack.

The explosions took place in the Burj el-Barajneh area, located off a main highway leading to Beirut’s airport. Burj el-Barajneh, a well-known commercial and residential spot, suffered extensive damage from the two blasts.

The bombings came at a busy time in the evening when the streets were full of families gathering after work.

Lebanon’s prime minister held an emergency meeting with ministers and military chiefs on Friday as his country mourned.

One of the suicide bombers blew himself up at the gates of a school, according to Lebanese Minister of Education Elias Bou Saab.

Witnesses said there were only minutes between the two blasts.

“I was standing outside my store with my friend when the first explosion happened,” one resident, who was wounded in the explosion, told Al Jazeera.

“He was martyred in the explosion. As I was trying to move him, the second explosion happened.”

Much of southern Beirut is a Hezbollah stronghold and witnessed a string of deadly suicide explosions in 2014, claimed by al-Qaeda affiliates.

“What happened here is a crime … This battle against terrorists will continue, and it is a long war between us,” Hezbollah official Hussein Khalil said from the site of the explosions.

The attack came as Hezbollah steps up its involvement in the Syrian civil war, now in its fifth year.

“Personally, I was against Hezbollah’s decision to get involved in Syria, but right now, I am convinced they were right. They are taking proactive action; they are not waiting for ISIL to come,” said area resident Mohammed Alabaman.

Kamel Wazne, a Lebanese political analyst, told Al Jazeera that the bombings came at a time when major offensives [backed by Hezbollah] were taking place in Syria against ISIL and the armed group, al-Nusra Front.

“This is probably just to remind Hezbollah there are other [groups] who can take revenge … It might be again the beginning of a circle of violence for Beirut.” 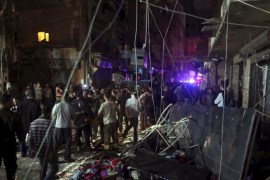 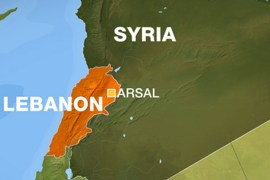 At least 10 others wounded in town near Syria with high refugee population but identities of casualties so far unknown.