The static pattern of US weather for the last few weeks has provided excess warmth to most states, regular flooding from the Gulf Coast to the Atlantic, and a feeling of never-ending summer.

But that appears to have come to an abrupt end.

Occasional cold air incursions have sneaked into the Great Lakes, and more recently across the border from British Columbia in Washington State.

It became a proper winter storm system and blizzard warnings were issued for parts of Utah, New Mexico, Wyoming, Colorado, Nebraska and Kansas.

Blizzard conditions hit the Denver area on Wednesday – less than 24 hours after the city hit a high temperature of 21C.

Fifteen centimetres of snow fell near Palmer in northern Colorado and near Lake George in the centre of the state. Up to 30cm of new snow fell in the mountains.

A tornado watch was issued for parts of Nebraska, Iowa, Missouri and Kansas – including Kansas City, Des Moines and Omaha.

The first tornado was seen over Avoca, Iowa and, in a rare piece of serendipity, Des Moines airport was able to see and report a tornado touchdown at 21:36 GMT.

The Illinois Emergency Management Agency issued an alert encouraging Chicago residents to stay aware of local forecasts and “be prepared to act quickly if storm warnings are issued”.

Southeasterly winds gusting to over 70km/h early on Thursday at the city’s O’Hare International Airport will be replaced by northwesterlies, which are strengthening, in the aftermath of the still deepening storm centre.

The winds could continue to cause damage – more than 12,000 customers lost power in the Kansas City area as winds gusted to over 100km/h.

Trees and power lines were downed in many communities across eastern Kansas and far western Missouri.

November storm systems are not uncommon, and can become severe. When cold air encounters the still warm waters of the Great Lakes, they can spin up to rival hurricanes in their intensity.

Forty years ago, on 10 November, 1975, the freighter Edmund Fitzgerald sank during a ferocious storm on Lake Superior, killing all 29 men aboard.

That storm generated sustained winds of 110km/h, gusts of up to 140km/h and waves reported up to 10 metres, according to another vessel in the area that survived the storm.

Deep though this current storm centre will be, it does not have the capacity to grow to hurricane strength.

However, winds of 80km/h are quite possible in a swath from Iowa, across the Lakes to New England.

An accompanying temperature drop of about 10Celsius will make it feel as cold as winter. 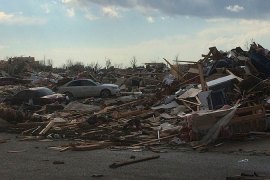 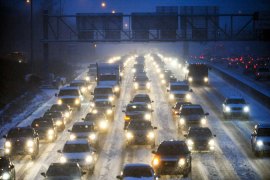