Hebron, occupied West Bank – At the start of the school day, students at the Tariq bin Ziyad school in Hebron mill around outside the white-brick building, talking to friends and playing football.

The teenage students show no rush to head to class. Conversations drift from friendly rivalries between Real Madrid and Barcelona supporters, to jokes about relatives back home.

Suddenly, just seconds later, the students all sprint towards the school doors – but it is not the school bell that gets them moving.

The now-familiar deep thud of a launched tear gas canister can be heard 150m down the road. Another 20 canisters follow in quick succession, turning the air white with gas.

Students pile into the building as quickly as they can. Those in the back shout frantically for the others to move faster; the gas is suffocating.

Living in Hebron over the past month, you are afraid of settlers, afraid of soldiers - you sometimes don't want to leave your home.

“Every day, clouds of gas hover over our school,” says the school’s head teacher, Rawhay Shukrie. “The gas bombs and the noises are affecting our students every day.”

The gas stings the eyes and makes it difficult to breathe. It isn’t unusual for those badly affected to pass out.

“All of this affects us – the students, their learning, our teaching,” Shukrie explains.

The teachers try to keep a sense of routine but have to react quickly in response to the events outside. Classes must be abandoned and breaktimes reshuffled or shortened.

The school and its surroundings, a built-up neighbourhood of schools, shops, and some residential buildings, are located beside the Israeli-controlled part of the Old City, which houses around 500 illegal settlers. In recent weeks, this area has seen a marked increase in Israeli army incursions and violence from soldiers and settlers.

“We can’t do anything,” Shukrie says. “We just have to rush students into the classrooms, try to keep them safe, calm them and then treat the students who are passing out from the gas.”

The escalation in violence in Israel and the occupied Palestinian territories has killed 77 Palestinians and 10 Israelis in recent weeks. Around a third of the Palestinian deaths have been in Hebron.

According to Natalia Garcia, the mental health activities manager in Hebron for Doctors Without Borders (MSF), recent events have exacted a heavy psychological toll on residents of the city. While there have always been tensions due to soldiers, settlers, and Palestinians living in such close quarters, the situation has been exacerbated over the past month – hitting the children particularly hard, she says.

“People are more afraid now than they were a month ago,” Garcia explains. “There have been incidents from the army, even in the schools. We’ve had to deal with the aftermath of this – with trauma in children.”

“Schools are now having to carry out psychological first aid for their students.”

This takes the form of immediate counselling sessions, where children are encouraged to express their feelings through drawings and re-enactments, she says.

“There is more anxiety. Some children are showing signs of isolation or increased anger, as ways to try and cope with what they are experiencing and witnessing.”

For some children, this anxiety can be reflected in a fear of going out or socialising; for others, it takes the form of rage as they lash out at family and friends.

As the school day draws to a close, a group of children, aged between about eight and 14, gather at the southern entrance of Shuhada street. They are here to throw stones at the nearby soldiers. It has become something of a routine over recent weeks.

Most of the stones make it nowhere near the soldiers, who stand for the moment with their guns slack, but with their tear gas grenades at the ready.

“They hate us,” says 10-year-old Mohammad of the soldiers. He speaks quietly, looking down at the ground as he does so.

The road is littered with burned debris, stones are strewn across the street, and the smell of gas still lingers in the air.

“They do whatever they want,” he says, suddenly looking up and projecting his voice. “They come to our houses, and they can take anyone they want; they can kill us. They will take me and my brothers if they wanted to.”

He seems to linger on that thought.

‘I want to play the way they do’

According to Garcia, some parents have stopped sending their children to school for fear that they could be injured or killed if they leave their homes; the children themselves are afraid.

“Just three weeks ago, I was going to the shop [when] they [Israeli soldiers] started opening fire. When I heard the gunfire, I just started running as quickly as I could,” says 11-year-old Saed Seider from the Dabuya area of Hebron.

He seems to be replaying the incident in his mind and looks shaken.

“I started crying. I thought someone had gotten killed. After a few minutes, I found out that someone had just died.”

Seider has sad, tired eyes that belie his youth.

A few weeks ago, he was detained by soldiers for four hours, blindfolded and taken to an army detention centre. He thinks about it every day, but he still has no idea why they took him.

“Every day, I am looking at them [the settler children] having fun. They are playing basketball and football. There is always a soldier with them,” Seider says. “The only thing I want to do is play, play without care – the way they do.”

Garcia explains that the psychological toll has caused many children to have nightmares. Some younger children have started wetting their beds, she adds.

“There are many who are wanting to sleep in the same room as their parents now because there could be an Israeli army incursion [at] any time.”

Schools have also reported soldiers firing tear gas and stun grenades into classrooms, conducting raids during school days – such as in al-Hajj Ziad Jaber school in Hebron’s Wadi al-Nasara area, where soldiers forcibly entered the school and started searching children for stones – and numerous students being sent to hospitals for tear gas exposure.

‘Left on the ground to die’

In Hebron, MSF has had to quintuple its outreach since the beginning of October to deal with the mounting trauma. The organisation treated approximately 500 people in the first half of last month, and there are still certain areas that its doctors cannot reach due to ongoing clashes and severe restrictions on freedom of movement.

Many residents say they have become afraid to walk in certain areas of the city or to walk alone.

“Everyone is struggling to sleep. We are all keeping an eye on the news; everyone is concerned,” says Issa Amro, the director of the anti-settlement organisation, Youth Against Settlements.

Amro says he saw soldiers fatally shoot a young Palestinian man near his home a week ago, even though the man appeared to pose no threat. “He was just left on the ground to die. He was still a teenager.”

The incident made him fear for his own life, Amro says.

“Living in Hebron over the past month, you are afraid of settlers, afraid of soldiers – you sometimes don’t want to leave your home,” he continues. “If you hear that someone was shot, everyone starts calling their family, calling back home, to see whether they are safe or not. Everyone is afraid.”

“When the children are out of the house, we worry that maybe they will never come back. We are afraid about our children, our families. We don’t feel safe at all right now.” 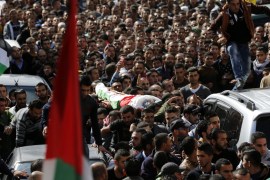 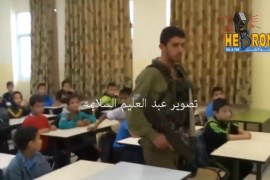 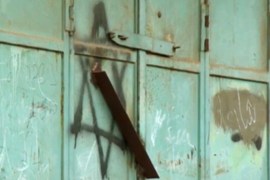