The United States’ FBI has said there is no evidence to show that September’s explosion aboard the Maldivian president’s boat was caused by a bomb.

The FBI said in a statement on Saturday that the debris it was asked to investigate turned out to be boat parts and not bomb remnants.

“Based on the FBI’s analysis, which included forensic analysis of the scene, analysis of the items recovered from the scene and chemical testing, there is no conclusive evidence to attribute the explosion on the boat to an [improvised explosive device],” the statement said.

The explosion took place on September 28 as President Yameen Abdul Gayoom and his wife were returning to the capital from the airport, which is on a separate island.

Gayoom escaped unhurt, but his wife, an aide and a bodyguard were injured in the blast.

The government has accused Vice President Ahmed Adeeb of plotting to assassinate the president.

Adeeb was arrested last week in connection with the explosion and has denied the allegations.

Maldives Foreign Minister Dunya Maumoon on Tuesday denied that dissident politicians were trying to unseat Gayoom and said he was in control.

Gayoom, 56, has provoked street protests in the Maldives with a crackdown on political dissent, including the arrest of the country’s first democratically elected president, Mohamed Nasheed, who was sentenced to 13 years in jail this year on terrorism charges that have caused an international outcry. 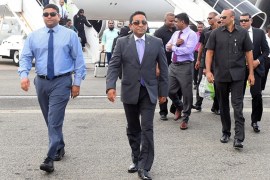