Four men have been sentenced to death in Bangladesh for lynching a 13-year-old boy and placing a video of the brutal attack on the internet in a case which sparked outrage across the country.

A court in the northeastern city of Sylhet handed down the sentences on Sunday, four months after the killing of Sheikh Mohammad Samiul Alam Rajon.

Among the four to be executed is the prime suspect, Kamrul Islam, who was deported from Saudi Arabia – where he fled in the immediate aftermath of the murder.

The man who filmed the incident, Nur Ahmed, was handed a life sentence on Sunday, while a number of others received jail sentences for being involved in the attack.

On July 8, Rajon was lashed to a stake, tortured and beaten to death by a number of men in Sylhet, who had accused him of stealing a bike.

Police said an autopsy revealed scores of injuries all over his body, including on the head and chest. He died due to internal bleeding.

A 28-minute video of the attack, in which the boy is seen begging for water as he lays dying in the street, sparked huge protests in Bangladesh after going viral on social media.

Rajon’s attackers can be heard on the footage trying to force him to confess his involvement in the burglary.

At one stage, he is told to walk away. But as he tries to get to his feet, one of the attackers shouts: “His bones are OK. Beat him some more.”

When the youngster begs for water, his attackers mock him and tell him to “drink your sweat”.

On Sunday, Rajon’s father Sheikh Azizur Rahman and public prosecutor Misbah Uddin Siraj told Al Jazeera that they were satisfied that the boy’s attackers had been brought to justice.

“The killing of Rajon is a tragic incident. The verdict in the Rajon murder case was delivered after four months and one day, which sets an example for protecting the rights of children,” Siraj said.

Defence lawyer Habibur Rahman Habib, however, said he would immediately appeal the ruling on behalf of his clients. 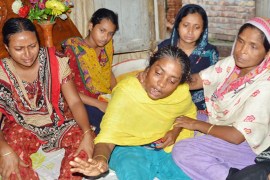 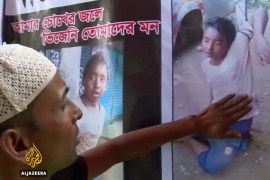 Internet video of disabled boy beaten to death provoked public calls for his killers to be prosecuted. 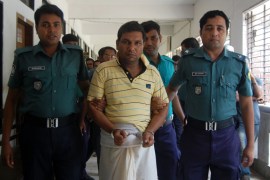 Suspect who fled to Saudi Arabia confesses to taking part in the lynching of Samiul Alam Rajon over a stolen bike. 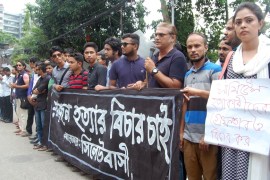 Police are searching for the group of men who beat 13-year-old boy to death and put the video of the torture online.