Bedfordshire, United Kingdom – About 1,500 people have protested outside the UK’s Yarl’s Wood Immigration Detention Centre, demanding that the government close its doors and release its detainees.

Wet and muddy conditions were not enough to silence cries for freedom from the demonstrators on Saturday afternoon after they squelched through two fields to reach the isolated centre.

Demonstrators, including a number of asylum seekers and refugees, travelled from as far as Glasgow to participate in the protest organised by the grassroots Movement for Justice organisation.

Holding banners up to the windows, the detained women participated in the protest via calls relayed on loudspeaker for the crowd to hear.

“I’m so proud of you,” said former detainee and Movement for Justice organiser Maimuna Jawo, addressing the women inside the centre.

“The more you keep on fighting, the more you’ll see us here. We are here because of you and we will shut this centre down!”

Saturday’s demonstration is thought to be the largest outside a UK detention centre so far.

Yarl’s Wood, located in Bedfordshire and one of 13 detention centres in the UK, has been subject to repeated condemnation, including allegations of sexual abuse, since it opened in November 2001.

Following an unannounced inspection in August, Chief Inspector of Prisons Nick Hardwick called the centre “a place of national concern”.

A detainee spoke of her fear at being returned to Nigeria where her brother was killed by Boko Haram.

This is despite Nigeria refusing to accept more charter flights carrying deportees, along with Afghanistan and Iran.

“They want to kill my human rights,” she said through the crackly loudspeaker. “We just want our freedom.”

On the verge of tears, another woman described how she had not been able to access her medication for a month.

“There is so much chaos and confusion here. We deserve better than this,” she said.

Joanna Frith from York conquered the difficult terrain in a wheelchair to attend the protest because many of her friends are Syrian citizens currently in refugee camps across Europe.

“The only reason they are in camps is because of what country they are from. We have failed people miserably,” she said.

As refugees continue to arrive in Europe seeking sanctuary, more citizens and refugees should know about detention centres, said Kingsley, who was detained in the UK’s Morton Hall Immigration Detention Centre for three months earlier this year before being released in August.

Kingsley, from Cameroon, said he was living in the UK on a valid student visa when he was detained.

“People are in detention who are not meant to be in there – victims of torture and sexual abuse, locked up for more than 12 hours a day,” he said.

“It is worse than prison because you don’t know when you will get out. Something is going wrong.”

As the sun came out at last on Saturday, protesters hung balloons to the fence and kicked it with no success, chanting “shut it down” and “huriya, huriya!” (freedom in Arabic).

Waving to the women in Yarl’s Wood, Bruk T – a 20-year-old woman who had spent five months in the centre earlier this year – told the women that “our freedom is your freedom. We are standing for all of you. Don’t give up”. 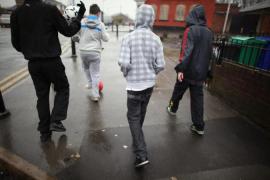 Homeless and stateless in the UK 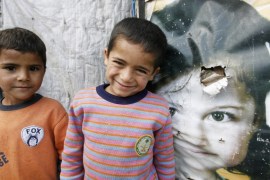 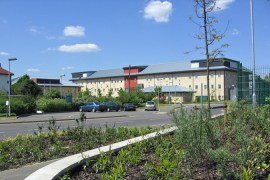 In limbo: Inside Britain’s detention system

Asylum seekers in the UK complain of neglect, abuse and lengthy detentions.