One of the candidates in Haiti’s presidential run-off has called the first-round results of the October 25 elections a farce, amid growing opposition protests in the impoverished Caribbean country.

Jude Celestin of the Lapeh party garnered 25 percent of the vote, according to results announced on Thursday.

He faces ruling party candidate Jovenel Moise, the front-runner at 32 percent in a December 27 run-off.

The results are a “ridiculous farce,” the 53-year-old Celestin said at a news conference on Friday.

“The results of the people have yet to be announced.”

RELATED: Some hope for Haiti

Speaking of the current government of President Michel Martelly, he added: “They have put in place a repressive force to crush the people, to kill the people, but they won’t be able to kill all the people.”

Celestin’s comments – met with applause from supporters – came as opposition protests grew. In some spots in the capital, tires were set ablaze.

“They don’t respect young people. They think they can do whatever they want with us,” protester Metelus Lafontant told the AFP news agency.

“If they don’t want to change their results, they’ll have to kill all Haitians because it’s not how we voted,” added the student.

“If they don’t change, we’ll take the streets and the country will never have stability.”

The UN and the “Core Group” of countries comprising the ambassadors of Brazil, Canada, France, Spain, the US and the European Union “deplored isolated incidents of violence and vandalism”.

In a statement issued late on Friday, the diplomats “urged the Haitian authorities to arrest and try those responsible, in full compliance with the law”.

The Organization of American States announced it was sending an observer mission for the run-off.

The October 25 election was the latest attempt in the Americas’ poorest country to shed chronic political instability and work towards development. 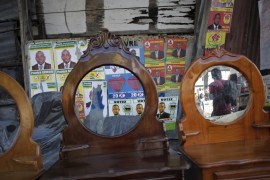 Poorest nation in the Americas goes to polls after campaign period marred by violence and lack of interest from voters. 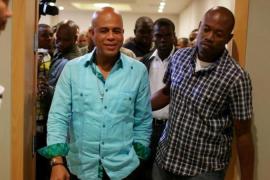