A bomb has killed at least five people and injured 15 others in the northeastern Lebanese city of Arsal, according to state media.

The blast appeared to have targeted the Qalamoun Muslim Scholars Committee, an Islamic group mediating between Lebanon security forces and the al-Nusra Front over the fate of kidnapped Lebanese security forces members.

The state-run National News Agency says the bomb was placed on a motorcycle that blew up outside the committee’s office.

Syrian scholar Osman Mansour, the head of the group, was among those killed.

In August 2014, the army arrested Imad Jomaa, a Syrian fighter affiliated with ISIL, in Arsal resulting in bloody clashes between ISIL fighters and the army and the kidnapping of dozens of Lebanese soldiers.

RELATED: ‘We are left alone, afraid to be living in Arsal’

The Lebanese army has been unable to access much of Arsal’s interior, which is occupied by armed groups affiliated with the Syrian opposition.

Salem Zahran, a security researcher and political analyst who monitors the Bekaa valley, where Arsal is located, said that the area is strategically crucial to the Lebanese army.

Over the last two years, in areas up and down the border, including Arsal, the army has clashed with ISIL, Nusra Front and other Syrian opposition groups seeking to expand into Lebanon.

Speaking to Al Jazeera, Zahran said that the army faces ISIL in several mountainous areas along the Syrian border and Nusra Front in others.

Control of two hilltops – known as al-Jarash and al-Hamra – allow the army to protect areas spanning the border “and form a line of defence”.

“The villages along the Lebanese side of these hills are mostly Christian villages and are targets of ISIL because they are vulnerable,” Zahran said.

Last month, eight people were killed and ten others injured by a bomb targeting a rebel gathering in Arsal.

The Syrian conflict, which began as a peaceful protest in 2011, has led to at least 250,000 deaths, according to the UN.

More than half of Syria’s pre-war population of 22.4 million has been internally displaced or fled abroad.

Since the beginning of the Syrian crisis, Lebanon has experienced periodic bouts of spillover violence.

In areas such as Tripoli, sectarian rivalries have given way to periodic bloodshed as tensions over Syria soared.

In the Ain al-Hilweh Palestinian refugee camp, groups with connections to Syrian opposition forces have launched a campaign of assassinations against local Palestinian political leaders and have clashed with Palestinian armed factions in the camp.

RELATED: Meet the Lebanese fighting next door in Assad’s army

Meanwhile, in several parts of the Bekaa region, fears over ISIL have prompted locals to take up arms and create impromptu militias.

The Lebanese Communist Party established its armed wing – which has yet to engage with ISIL or Nusra Front – in June, after ISIL fighters attacked military posts controlled by Hezbollah, which has been fighting alongside the Syrian government. Clashes in June killed 22 people, including Hezbollah and ISIL fighters.

In 2014, a Christian armed group was created in Ras Baalbek to patrol the village and its surrounding area.

Elsewhere, in eastern and southern Lebanon, the Resistance Brigades, a Hezbollah-backed group, serves a similar function. 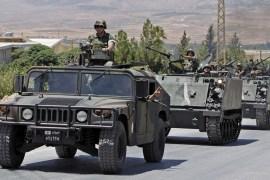 With their lands used as bases for various armed groups, farmers say they have been unable to tend their crops. 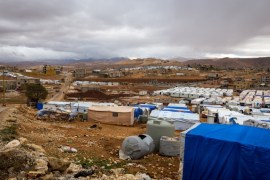 ‘We are left alone, afraid to be living in Arsal’

Amid power struggles between armed groups, thousands of residents and refugees of Lebanon’s Arsal are feeling hopeless. 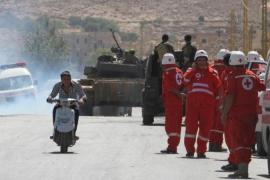