The Syrian government has continued its air strikes on a Damascus suburb despite the Jaish al-Islam opposition group using dozens of prisoners from President Bashar al-Assad’s Alawite sect as human shields.

A video posted online by the Shaam News Network, an opposition media outlet, showed the prisoners in cages on the back of pick-up trucks driving through opposition strongholds of Douma and Eastern Ghouta.

Speaking to Al Jazeera, local residents confirmed that Jaish al-Islam – an anti-Assad armed opposition group – has also been periodically moving the prisoners to the rooftops of homes as a supposed deterrent to incessant government air strikes.

Yet, they said that 250 civilians, including 50 children and 20 women, were killed by government forces in attacks during the last three days alone.

RELATED: Obama: No US troops on Syria front lines

Muhammad al-Abdullah, a photographer who lives in Douma, also said that air strikes have continued without pause. “Today the attacks started in the morning and didn’t stop until after nightfall,” he told Al Jazeera over phone.

The UK-based Syrian Observatory for Human Rights, which relies on a network of local activists, also reported that the opposition group has placed these cages on the rooftops of some buildings in Damascus suburbs with the aim of “reducing the air strikes and rocket attacks on civilians”.

The Observatory confirmed that government forces fired at least six missiles in the area on Tuesday.

Baraa, a local journalist who did not provide his last name, said that the detainees – both men and women – are relatives of high-ranking Syrian army officers.

“The men and women in the cages were detained during battles in Ghouta and Adra. Opposition fighters placed each group in at least 50 cages and put the cages in the centre of the city of Douma,” he told Al Jazeera on Tuesday.

“I was there and witnessed opposition fighters placing them in cages,” he said, adding that none of the prisoners are children.

Jaish al-Islam made the decision to put the hostages in cages at the behest of local residents following a series of brutal government air strikes on Douma, he claimed.

The armed group has also released videos in which the prisoners plea with the Syrian president.

“I am from the Alawite sect,” the man, whose name was not given, said. “I have been imprisoned for three years in Eastern Ghouta.”

RELATED: Analysis: US special forces in Syria, why now?

“We tell Bashar al-Assad to end all air strikes on these areas, these people are innocent civilians. If you want to fight back or defend the country attack the opposition fighters and not civilians,” he said.

Contacted by Al Jazeera, a Jaish al-Islam spokesman declined to comment on the precise number of prisoners being held in cages.

“If the Syrian government really cared about these people they would have negotiated a deal or ended the air strikes, but they did not,” Baraa said.

Muhammad al-Abdullah, the photographer, said that Jaish started parading the prisoners through the towns in Douma to raise support for the initiative.

“When they aren’t driving them around or putting them on the roof, the prisoners go back to a jail,” he said.

He added that many residents have supported putting the prisoners in cages, while others have objected. “I can’t say a percentage, but there are people here against the idea,” he said.

“The main point of difference is that the women are being held in the cages also,” he added. “Many people disagree with this and are against it.”

Nadim Houry, Human Rights Watch’s deputy director of its Middle East and North Africa division, said that his organisation has been aware of the prisoners’ detention for a long time.

“This is also not the first time human shields have been used,” he told Al Jazeera.

Douma and Eastern Ghouta have been targeted and besieged by government forces for some three years.

Dozens of people have been killed and hundreds injured in government bombing of Douma neighbourhoods in recent weeks.

RELATED: Playing football to cope with the trauma of Syria’s war

In September, residents of Kufraya and Fouaa – a pair of Shia-majority towns in the Idlib province – captured fighters from Jaish al-Fateh, a coalition of armed groups that had been besieging and attacking the towns.

They released images of the fighters in cages on top of buildings, hoping to deter indiscriminate shelling by Jaish al-Fateh.

“We do not know the scale or extent of what is happening, but we have no doubt it is taking place,” Houry said. “Nothing can justify caging people and intentionally putting them in harm’s way, even if the purpose is to stop indiscriminate government attacks.”

“The air strikes have not stopped as they thought they would,” he added, adding that local media reported that a prisoner was injured by rocket shrapnel that landed near his cage. 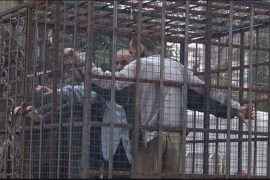 Prisoners believed to be regime officers used as shield near Damascus as Assad forces intensify bombing of rebel areas. 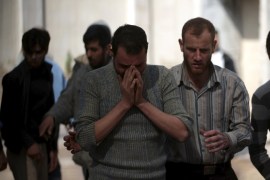 Nearly 150 killed in deadly day of air strikes in Syria

Eighty killed in government and Russian raids in Aleppo, while at least 61 people were killed in Douma. 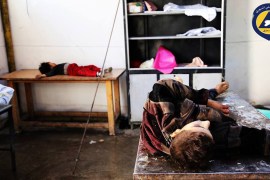 At least 61 people dead and over 100 others wounded in reported attack on market as peace talks begin in Vienna.