The Russian airline whose passenger plane crashed on Saturday in Egypt’s Sinai Peninsula has insisted that a technical fault could not have caused the disaster.

Alexander Smirnov, the deputy general director of Kogalymavia, which operates flights under the name Metrojet, said on Monday that the disaster was most likely caused by an external “impact”.

“The only plausible reason can be a mechanical impact on the plane,” Smirnov told a press conference.

“There is no combination of system failures that could cause the plane to be destroyed in the air,” he was quoted as saying by the Interfax news agency.

Investigators from several countries have joined an Egypt-led probe to determine what brought down Russian airline Kogalymavia’s flight 9268 on Saturday, killing all 224 people on board, en route from Sharm el-Sheikh to Saint Petersburg.

Russian officials said on Monday the plane broke apart in mid-flight, as international investigators began probing the reasons behind the crash.

“It is too early to speak about the crash causes,” said the Chief of Russia’s Interstate Aviation Committee, Viktor Sorochenko, after examining the site of the wreckage, according to the TASS news agency.

“The plane broke down in midair, and its fragments are scattered over a vast area of about 20 square kilometres,” he said.

Speaking to reporters, Metrojet’s Smirnov said the pilots “totally” lost control of the plane and did not try to make any radio contact before it crashed.

“The crew totally lost control and for that reason there was not one attempt to get in contact,” said Smirnov, adding that the jet was in “excellent technical condition”.

The bodies of 164 of the victims were flown home from Cairo airport late on Sunday, accompanied by Russian Transport Minister Maxim Sokolov.

They arrived in the the Pulkovo airport in Saint Petersburg early on Monday.

An Egyptian civil aviation official said Russian search and rescue teams on Monday would resume combing the crash site in Sinai’s remote desert interior for the bodies of the remaining victims. 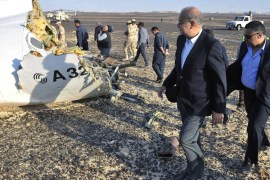 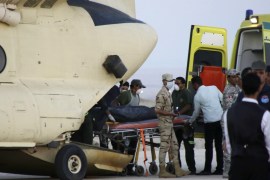