Cyclone Chapala has tracked west from its position in the Arabian Sea, potentially taking it on a path towards eastern Yemen’s war-torn sea port of Mukalla and its population of 300,000 people.

The storm is expected to bring torrential rain, thunderstorms, strong winds and damaging storm surges when it makes landfall on Monday evening.

Mukalla could see up to 500mm of rain from the cyclone – more than seven times its average yearly rainfall of 70mm. Such an amount would cause widespread flooding, and given the rugged terrain, also lead to flash flooding and landslides.

While Chapala began to weaken on Saturday night after reaching strength equivalent of Category 4 status a day earlier, the cyclone was still packing sustained winds of about 200km/h, according to the US navy’s Joint Typhoon Warning Center(JTWC).

The JTWC reported that Chapala was expected to continue weakening as it closed in on the coast over the next 36 hours, but it was still on track to make landfall as a major storm with sustained winds of about 130 km/h on Monday evening.

The storm comes as Yemen is stuck in the middle of a brutal war, which has seen least 5,400 people killed and 1.5 million people displaced since March.

Taking advantage of the fighting taking place elsewhere in the country, al-Qaeda in the Arabian Peninsula seized Mukalla in mid-April, asserting itself as a defender of Sunni Muslims threatened by the Shia Houthi fighters and as a modicum of stability in a bitterly divided tribal region.

Chapala had initially been expected to hit the coast further north, closer to the Yemen-Oman border.

Oman’s Public Authority for Civil Aviation issued a statement on Saturday night, advising the public to “take necessary precaution and stay away from low-lying areas, [and] avoid crossing wadies”.

It also advised “fishermen and sea goers to avoid [venturing] into the sea”, with wave heights expected to reach 7 metres in some areas.

The Times of Oman reported that residents in Oman’s southern city of Salalah were “battening down the hatches” on Saturday ahead of the impending storm.

American astronaut Scott Kelly took a photo of the storm on Saturday from the International Space Station, urging those in the cyclone’s path to keep safe. 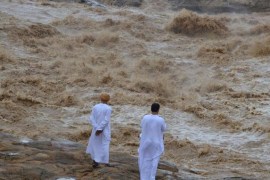 No casualties reported, but schools closed across the country and hotels stopped taking guests before storm. 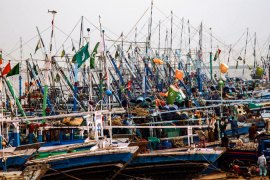 One of the most powerful cyclones ever recorded in the region is heading towards India.