India’s foreign ministry has demanded Saudi Arabia punish one of its citizens for chopping the hand off an Indian domestic worker.

In a statement published on its website on Friday, the ministry said it wanted “severe punishment” for the perpetrator of the attack on Kasthuri Munirathinam.

“As the Honourable External Affairs Minister has stated today, this brutal incident is deeply disturbing. Our Mission officials have visited Mrs Kasthuri in the hospital. Her situation is currently stable,” the statement read.

India’s Minister of External Affairs Shushma Swaraj called the attack unacceptable and said she was “disturbed over the brutal manner” Munirathinam had been treated.

Chopping of hand of Indian lady – We are very much disturbed over the brutal manner in which Indian lady has been treated in Saudi Arabia.

Munirathinam, who comes from a village in the southern state of Tamil Nadu, had suffered a catalogue of abuse since taking up a post as a domestic worker in Saudi Arabia three months ago, according to her family.

“Her right hand was chopped off by her employer when she tried to escape the daily harassment, torture and abysmal work conditions,” her sister Vijayakumari told the AFP news agency by phone from Tamil Nadu state’s capital Chennai.

Vijayakumari said that her sister had gone to Saudi Arabia to help pay off her family’s debts and she had been promised a monthly salary of around $180.

“But she was not paid, she was barely given enough to eat and not even allowed to speak to her family … Now she only wants to come home,” Vijayakumari said.

The family says that problems started for Munirathinam, who was one of five domestic workers in the same household, after she complained to the local authorities about her situation.

Footage of Munirathinam lying in her Saudi hospital bed was broadcast by several Indian media outlets.

Foreign ministry spokesman Vikas Swarup confirmed that Munirathinam was still recuperating in the Riyadh hospital but said that efforts were being made to bring her home.

“We are in touch with the woman, hospital and the local police authorities. She will get all possible legal and other help from the embassy,” Swarup said.

This is unacceptable. We have taken this up with Saudi authorities.

Hundreds of thousands of Indian migrants work in households in Saudi Arabia and other Gulf countries but complaints about their treatment by their employers often make headlines back home.

A video showing a male Indian worker being beaten by his Saudi employer went viral in September, sparking a widespread backlash on social media.

There was also widespread anger last month when the first secretary at the Saudi embassy left India under diplomatic immunity after being accused of holding captive and raping two Nepalese maids in his home. 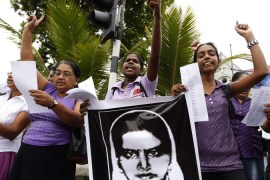 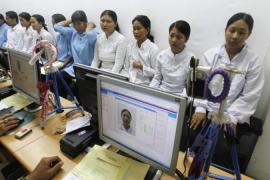 Maid to work: Gulf labourers hope for day off

New proposal aims to protect rights of region’s many domestic workers, but critics say charter does not go far enough. 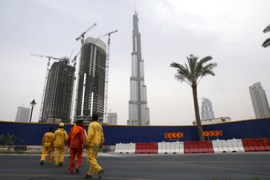 Workers from Bangladesh and Pakistan are without help from UAE authorities.